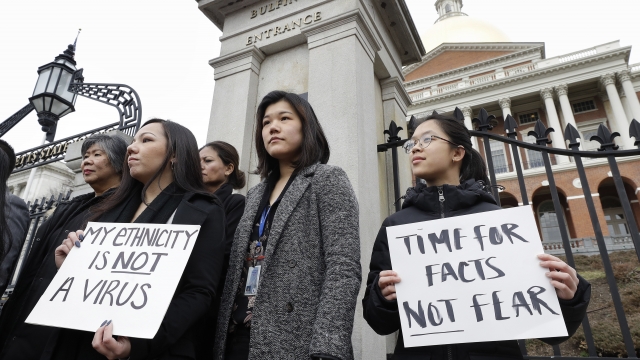 SMS
Attacks Against Asian Americans Gain National Attention
By Austin Kim
By Austin Kim
March 11, 2021
Discrimination against Asian-Americans has been going on for years. A look at why the nation's attention is turning to recent hate incidents.
SHOW TRANSCRIPT

Shocking and violent footage of acts against Asian Americans is getting sustained news coverage.

"A sharp rise in attacks against Asian Americans."

"Statistics that show violence against Asian Americans is skyrocketing."

That coverage is significant in the view of Russell Jeung.

"Most racial discourse in the U.S. is black, white and because Asians are neither Black nor White, we don't get addressed,"he said. "We feel invisible."

Why are recent Anti-Asian incidents receiving more attention? Jeung says there are a number of factors: videos are hard to ignore, celebrities are raising awareness and more Asian Americans are in high-profile positions.

"This is a moment for the Asian American movement in setting the backdrop of Black Lives Matter, and when America is addressing racial equity issues, this is our moment where we're at the forefront," Jeung said.

Younger Asian Americans are also taking an active role, according to Yoon Pak from the University of Illinois at Urbana Champaign.

"It could be a large part with the growth of social media," Pak said. "Folks are really in there and testing each other and really checking each other on the kinds of biases and violence that they also witness."

That's notable because some Asian American parents may have told their kids not to "rock the boat" or bring too much attention to yourself, even in the face of discrimination.

"I was just talking about this with my parents the other day," Melisa Borja said. "They realize now that that was an act of self-preservation, but maybe not the best solution. And I think one thing that I inherited from that experience is a commitment to make sure I am educating the next generation of Asian Americans to speak up, to organize, to talk to other community members, to find courage."

Those who study these issues closely say it's also important to recognize those who may be too afraid to come forward. There could be a language barrier or some may be wary of engaging with law enforcement because of their family's immigration status.

"There are ways in which we could maybe redesign or reconfigure the way that these reporting structures work so that they really make it possible for people to come out of the shadows and participate fully in public life," said Ian Shin from the University of Michigan.

To be clear, Asian Americans have been organizing movements for years, drawing attention to the same issues we're seeing today. But organizers hope this current wave of activism can take forms beyond a march or a rally.

"So a teacher incorporating a curriculum that students had never even seen, a picture of themselves, a representation of that sort, I would call that a form of activism," Pak explained.

"What I think this pandemic is illuminating is the need for there to be real government institutions and community institutions to help Asian Americans have a seat at the table and get the resources they need," Borja said.