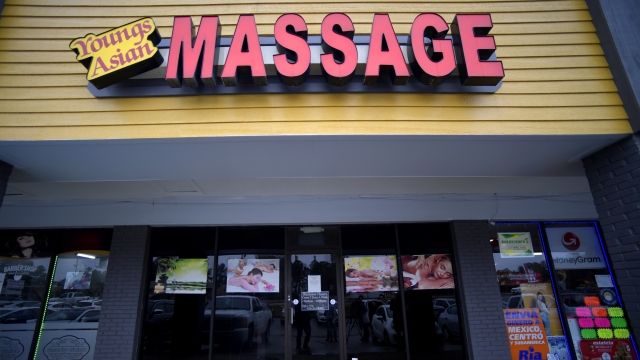 SMS
Motive in Atlanta Shooting Unclear But Fuels Fear in Asian Community
By Jamal Andress
By Jamal Andress
March 18, 2021
The alleged gunman reportedly told authorities his attacks were not racially motivated but rather the result of a sex addiction.
SHOW TRANSCRIPT

The alleged gunman who killed eight people, six of Asian descent, during a shooting spree at three Atlanta-area massage parlors reportedly told authorities his attacks were not racially motivated but rather possibly the result of a sex addiction.

Cherokee County sheriff’s office Capt. Jay Baker said, "He apparently has an issue, what he considers a sex addiction … it’s a temptation for him that he wanted to eliminate."

The 21-year-old suspect, Robert Aaron Long, was arrested overnight after local authorities identified him and made contact with Long's family. Long is suspected in all three shootings but so far has been charged with four counts of murder and one count of assault.

Whatever the gunman's motive, this is yet another attack on the Asian American community during a time when hate crimes against this group are on the rise.

Atlanta Mayor Keisha Lance Bottoms said, "This is an issue that is happening across the country. It is unacceptable, it is hateful."

Rep. Judy Chu, a Democrat from California, said, "The AAPI community has been living in fear of verbal and physical attacks. And now we're experiencing increasingly deadly tragedies of racism and violence."

Heidi Beirich, a co-founder of the Global Project Against Hate and Extremism, said, "Asians in Georgia, in Atlanta, are going to be absolutely fearful after this. Hate crimes terrorize entire communities. That's why we give enhanced penalties and have a separate charge for that. Because the crime isn't about stealing my wallet. It's attacking me for who I am."

The shootings in Atlanta mark the deadliest mass killing this year and the worst since August of 2019 when a gunman killed nine people and injured 17 others at a Dayton, Ohio, bar.