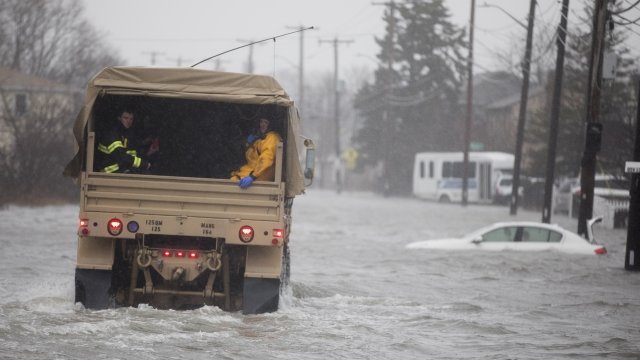 SMS
The Deadly Storm On The East Coast Might Be On Its Way Out
By Lindsey Pulse
By Lindsey Pulse
March 3, 2018
The National Weather Service said Saturday the powerful nor'easter is pulling away from the New England coast.
SHOW TRANSCRIPT

A powerful nor'easter on the East Coast killed at least five people and left over a million without power.

The storm — which morphed into a "bomb cyclone" — downed power lines and brought massive flooding and hurricane-force winds across several states. All of the people who died were killed by falling trees or branches, according to reports.

Over 3,000 domestic flights were canceled Friday and hundreds on Saturday. The governors of Virginia and Massachusetts have declared states of emergency.

The National Weather Service said Saturday the storm is pulling away from the New England coast and that conditions will improve.