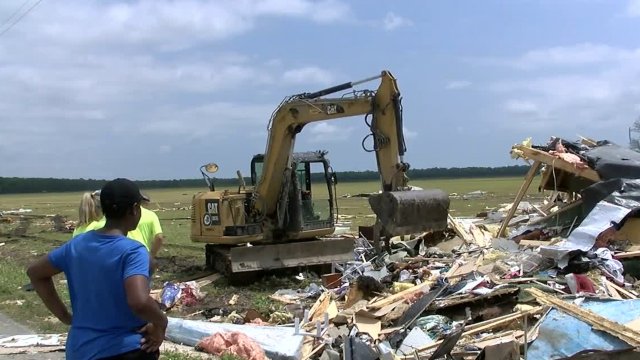 A tornado in Louisiana has left a path of destruction along the northern Gulf Coast, with at least two people dead after extreme weather.

"Boom, boom, boom, everything just sounded like a bomb," Gladys Johnson said. "The house was shaking and we all ran into the bathroom and we hugged each other and said a prayer."

This woman's brother and sister-and-law are now hospitalized, after winds up to 140 miles per hour sent the couple and their home in the air, landing yards away.

And emergency officials say a 48-year-old man was killed when a tree fell on his mobile home.

The severe weather moved east into the Florida panhandle where a tornado was captured off the coast of Panama City and a home and convenience store were flattened.

Almost 65 million people are affected by the storm...the latest in a turbulent spring in the south that saw about 50 tornadoes howl through 10 states last month with five people killed in Alabama.

Now the St. Landry Parish president says the priority is to allow residents to salvage anything they can from the rubble.