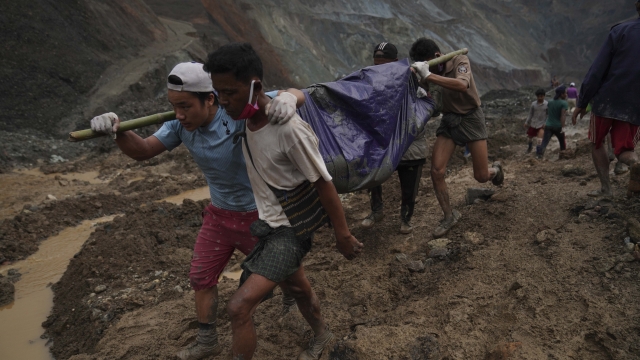 More than 160 people were killed and more are still missing in a landslide at a jade mining site in northern Myanmar.

The country's fire department said Thursday the miners "were smothered by a wave of mud" in the ensuing landslide after a heavy rainstorm in the Hpakant township, a jade-rich area in Kachin state. Officials said 162 bodies had been recovered as of Thursday evening local time, and another 54 people were injured. Authorities did not say how many are still missing, but some estimate the death toll could exceed 200.

The United Nations in Myanmar said it was "deeply saddened by the loss of life" and extended "its sincere condolences to the families of the victims."

International watchdog group Global Witness accused Myanmar's government of having "turned a blind eye" to "illegal and dangerous" jade mining practices in Kachin, and called Thursday's disaster "a damning indictment of the government's failure" to reform the country's jade sector as it promised.