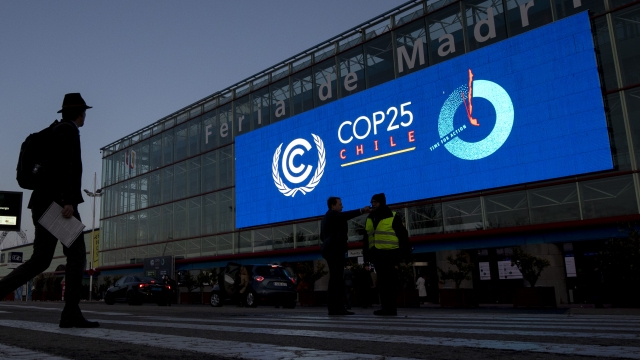 SMS
COP25 Talks Climate Solutions, Even As The US Leaves Paris Agreement
By Evan Thomas
By Evan Thomas
December 5, 2019
U.S. plans to leave the Paris agreement won't disrupt ongoing climate talks, but the countries who are still in are feeling the pressure.
SHOW TRANSCRIPT

At the U.N.'s COP25 climate conference, nations hope to finalize rules to reduce global carbon emissions — right as the U.S. backs away from the Paris agreement. But experts think the U.S. leaving the pact won't do too much to slow down the latest global climate action.

The U.S. is the world's second-heaviest single polluter. If it leaves the Paris agreement in 2020, it could get harder for the world to regulate about 14% of global emissions. Experts like Andrew Light, a distinguished senior fellow at the World Resources Institute, say this is already weighing on decision-making in places like China.

"It was absolutely clear that the Chinese are feeling international pressure right now on reviewing their own current NDC, or their commitment under the Paris agreements," Light told Newsy. "They are the largest emitter in the world. And everyone kind of knows that the second largest emitter in the world, the United States, is now sitting it out."

This won't do much to disrupt COP25, which is more about finalizing rules and setting timelines for future action. Light says countries interested in announcing new or bigger commitments may do so sometime in 2020.

And Light says even if the executive branch wants out of the Paris agreement, there are governments at other levels in the U.S. who would rather keep their emissions in line with the original plan.

"We have an amazing, self-organized backstop that emerged in this country, essentially as soon as the president announced his intention to withdraw in June 2017," Light told Newsy. "It's basically states, cities, businesses, universities, others who have made real targets that can be tracked, that are not just rhetorical.  … Consistent with the U.S.' original commitment under the Paris agreement of a reduction of 26-28%."

Still, the stakes are higher than ever. Experts say COP25 needs to be a launching point for more ambitious reductions in 2020, especially as the U.N. sounds urgent calls for countries to address emissions.

"Now is the time we need them to really enhance and dig deeper and try to do more. And I think the opportunity set is fantastic for them if they choose to do so," Light said.