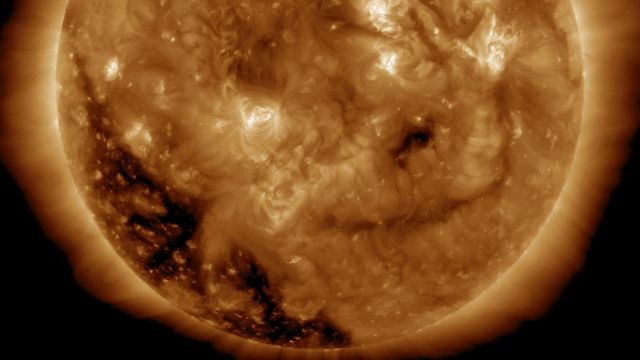 SMS
Our Sun May Have A Long-Lost Twin — Scientists Named It 'Nemesis'
By Casey Mendoza
By Casey Mendoza
June 15, 2017
Astronomers say it's likely "Nemesis" broke away from our sun millions of years ago.
SHOW TRANSCRIPT

Some astronomers think our sun most likely had a twin, and they've given that hypothetical twin an interesting name: "Nemesis."

Scientists have theorized for a while that stars are born in binary systems, where companion stars orbit together. Our stellar neighbor Alpha Centauri is a triplet system — and you may be familiar with a famous example from science fiction.

In the "Star Wars" universe, Luke Skywalker's home planet, Tatooine, exists in the binary "Tatoo system." Its two suns, Tatoo I and Tatoo II, famously formed a duel sunset at the beginning of the film.

Scientists began hypothesizing in the '80s about our sun's possible twin. NASA hasn't been able to find any sign of Nemesis yet, but now they have an idea of where it could have gone.

A new study found that young stars — like our sun — are forming at least 500 astronomical units apart from their companion. That's about 47 billion miles.

With this information in mind, scientists ran computer simulations to see how star systems formed. An estimated 60 percent of binary systems broke up to form single-star systems, and astronomers are thinking that likely happened to our sun.

That means Nemesis most likely broke away from our system, and if that's the case, there's very little chance we'll ever be able to find it.

So why the name Nemesis? Scientists playfully came up with the name after theorizing the hypothetical "evil twin" slugged asteroids — such as the one that supposedly killed all the dinosaurs — at our planet.