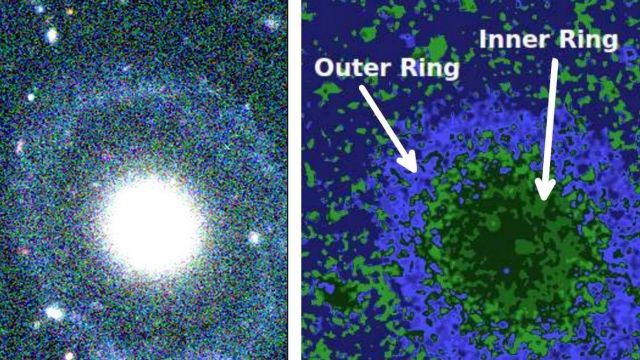 SMS
Astronomers Find A Rare Ring Galaxy With An Even Rarer Second Ring
By Evan Thomas
By Evan Thomas
January 6, 2017
Ring galaxies are already a 1-in-1,000 occurrence. You're even less likely to find one with another dim ring inside.
SHOW TRANSCRIPT

Gravity pulls most galaxies into spiral or elliptical shapes. But on rare occasions, they're shaped like rings.

It takes something special to leave an unattached halo of stars and gas just floating there, and scientists still aren't sure what that is. But they have a lot of theories. 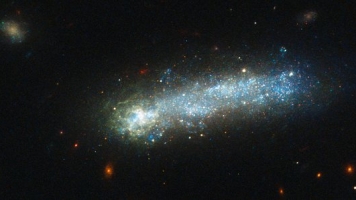 It could be that collisions with other galaxies punched holes through them. Or maybe the galaxy used to have central bars that disintegrated. Or the ring could be gas that got vacuumed up from a nearby dwarf galaxy.

However they're formed, they don't form often: Fewer than 1 in 1,000 galaxies are shaped like rings.

But it turns out these cosmic rarities can get even more unique. Researchers just found a new ring galaxy — and when they took a closer look, past the bright visible light of the core, they found a second dimmer ring.

"That's actually a red feature that appears to be another diffuse ring," said astrophysicist Patrick Treuthardt.

Two rings suggests the galaxy's gone through two distinct stages of formation. If so, it could be an exciting addition to our knowledge of ring galaxies — but astronomers aren't any closer to understanding how it happens.