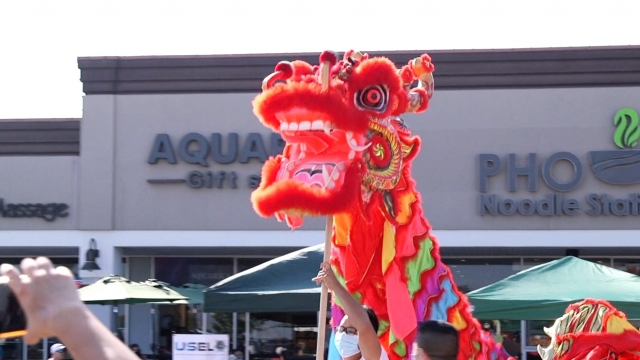 About an hour and a half drive from Chicago — in Aurora, Illinois — hundreds gathered in an Asian grocery store to watch and celebrate the Moon Festival, or the Autumn Harvest.

In some Asian cultures, it's a time when families get together — like Thanksgiving.

Jennifer To brought her nephew to the festival.

"Now he's at the age where he can have memories," To said. "This would be great because I remember when my sister and I, like my parents brought us to Chinatown."

And there was a massive crowd.

"I want to learn more of it. Maybe the language also," attendee Iliisimar Zapien said. "I'm Mexican, so it's a little bit different, but it's great to learn."

"The Asian grocery store [is] not only for providing the food for the Asian Chinese community. [It's] also for everyone," Windfall Properties President Eddi Ni said.

Ni bought the strip mall three years ago when stores were closing and leaving.

Since then, they've grown — despite the pandemic. With the Chinese grocery store at its center, other Asian businesses followed suit.

Now it has attracted 33 new businesses and the mall got a new name: Pacifica Square.

"Here is the Chinese longan from South China. It's a really special fruit in China in tropical areas. ... It tastes very sweet and juicy," Park To Shop Manager Lu Angee Bai said. "There are some live seafood: fish, tilapia, sea bass."

In her book "Crying in H Mart," Michelle Zauner sought comfort in the Korean supermarket aisles while mourning the death of her Korean mother. She wrote: "We're all searching for a piece of home, or a piece of ourselves."

Ethnic supermarkets are a $46 billion industry, and in Aurora, there is definitely a need serving Asian American and Pacific Islanders, which is the fastest-growing ethnic group in the U.S.

"There's a large Asian demographic and there's nothing really catering towards this community," Windfall Group director of real estate Judy Ni said. "So having the grocery store and having this attract all the other businesses, a lot more businesses are wanting to open and to show off their culture and the type of food that they're servicing."

For AAPIs in the area, it's about finding comfort and safety in each other — and of course, the food.

"The last 18 months have been crazy with the anti-Asian hate and discrimination, so being able to come to communities and be with other peers has been more comforting," Aurora resident Ayrton Travina said.

An Asian grocery store can be much more than just a place to shop.