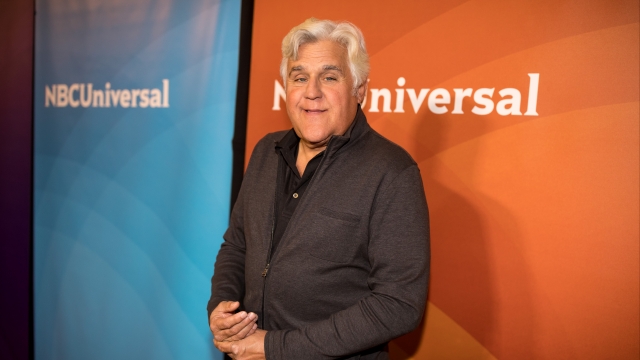 SMS
Asian Americans Advocacy Groups Criticize Jay Leno For Racist Jokes
By Johannah Grenaway
By Johannah Grenaway
December 19, 2019
Jay Leno allegedly made a joke about a picture of dogs, saying the pets look like something you would see "on the menu at a Korean restaurant."
SHOW TRANSCRIPT

Asian American advocacy groups are challenging NBC and comedian Jay Leno after he made a racist joke on the set of the network's "America's Got Talent."

In April, Leno appeared as a guest judge on the show. He made the comment while taping alongside other judges, such as Gabrielle Union, Julianne Hough, Howie Mandel and Simon Cowell. Variety exclusively reported that Leno made a joke about a picture of Cowell with his dogs, saying the pets looked like something you would see "on the menu at a Korean restaurant."

Union reportedly told producers to bring the offensive comment to HR. No report was filed, but those specific remarks from Leno were cut from the show that aired in August.

Asian Americans Advancing Justice (AAJC) and other advocacy groups for Asian Americans have challenged NBC to end its relationship with Leno, whose show is owned by NBCUniversal. The groups say Leno has made stereotypical jokes about Asians in the past, citing a show he did in 2002.

The Asian Americans Advancing Justice's Vice President of Policy and Programs told NBC, "We understand that humor often can be used to try to connect, open doors or defuse a situation. Unfortunately, Leno's attempt at humor serves no purpose and plays on stereotypes that are hurtful and close doors on understanding our diverse community," and "this behavior must stop."

Leno's remarks aren't the only allegations of "toxic culture" tied to "America's Got Talent." Union said she was on the receiving end of racist remarks herself. And inside sources told Variety that Hough also received constant criticism on her appearance. Neither of their contracts were renewed. Former host Nick Cannon has previously spoken out about racism within the company and show as well.

Variety reports Leno and NBC declined to comment, citing the network's ongoing investigation into the culture around "America's Got Talent."