As War Divides Countries On The Ground, What's Happening In Space? 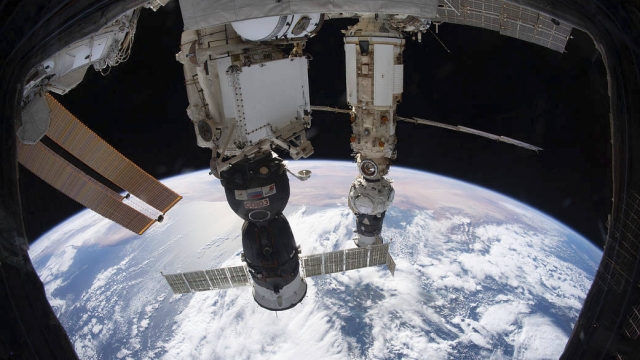 SMS
As War Divides Countries On The Ground, What's Happening In Space?
By Clayton Sandell
By Clayton Sandell
March 11, 2022
Russia has driven tension between countries on land. Now the conflict is reaching astronauts from around the world still working in outer space.

The International Space Station has long been held up as a symbol of international cooperation.

Aboard the space station, a rotating crew of astronauts from nearly 20 countries has traditionally — and literally — floated above earthbound political fights.

But with the invasion of Ukraine, the leveling of harsh international sanctions and accusations of war crimes, the souring relationship between Russia and the United States now reaches into orbit.

It started when Dmitry Rogozin, the head of Russia’s space program, tweeted a video saying a Russian rocket would look better without the flags of its partners.  He suggested that without Russia, the station might come crashing down.

Retired NASA astronaut Scott Kelly, a space veteran who once spent nearly a year on the space station, fired back, writing in Russian, "If it weren't for these flags and foreign currency that they bring, your space program would not be worth a damn," suggesting Rogozin could maybe get a job at McDonalds.

"I just felt obligated to point out the fact that if he did that, their space program would have no reason to exist and would probably go out of business," Kelly said.

Then came a video posted by Russian state media, which included clips pretending to show the Russians abandoning American astronaut Mark Vande Hei. At the end of the month, he is set to return to earth on a Russian capsule.

"When I saw that, I was shocked that they would not only suggest that, but also take the time to produce a video of such high quality, so I felt obligated to speak out," Kelly said.

When the space shuttle program ended in 2011, NASA was forced to rely on Russia for rides to and from the space station, but now U.S. astronauts can hitch rides on capsules launched by Space X. Company founder Elon Musk recently tweeted Rogozin a simple reminder — the Space X logo.

"The idea that Mark Vande Hei would get left up there with no way ever to get home is — that’s not going to happen," Kelly said.

NASA so far has stayed out of the Twitter spats.

"So they're really sort of sitting there wondering what's next, and nobody has an answer other than to just wait and see what is next," Keith Cowing, editor at NASAwatch.com, said.

The question now is whether or not the U.S. Russian space partnership can survive.

"I think the worst-case scenario with regards to the space program is if Russia pulled out of it," Kelly said. "It’s an opportunity on neutral ground to work together peacefully and cooperatively."

Right now there are two Russians and four Americans on board the station. Kelly says they’re likely doing their best to put aside what’s happening far below.

"The environment onboard might be a little bit tense, but I don’t see it affecting their ability to work together and function," Kelly said. "I hope Vladimir Putin will decide that this war is immoral, it’s unjust, it’s criminal. It really is a war of one man perpetrated on a peaceful country."