Democrats Rally For Gun Action, But Will Cause Die With Impeachment? 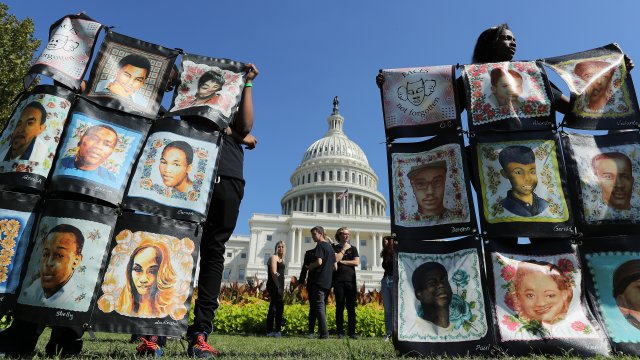 SMS
Democrats Rally For Gun Action, But Will Cause Die With Impeachment?
By Peter Hecht
By Peter Hecht
October 2, 2019
Amid anger over mass shootings, Joe Biden and fellow Democrats advance gun control plans. But impeachment may put them on political life support.
SHOW TRANSCRIPT

This campaign spot for Joe Biden, with its ominous music, casts the gun issue in stark partisan contrasts. But will the deep political fissures over impeachment drown out this debate?

"It’s truly wonderful to be back with my friends at the NRA. Only one candidate came to speak to you and that candidate is now the president of the United States.”

"Who in God's name needs a weapon that can handle 100 rounds? For God's sake! The 2nd Amendment says we can limit who can own a weapon, can limit what kind of gun you can own. The only guy who has ever beaten the NRA is me."

But the event and Biden's proposal came as a House impeachment inquiry focused on President Trump soliciting Ukraine to investigate the former vice president. Amid that, Democrats say they're still determined to advance gun control legislation.

He said: “If you need to reach some kind of bipartisan agreement and one party is determined to throw the president out of office, rightly or wrongly, it’s a little hard to see how that builds the kind of goodwill that’s necessary on this or any other issue.”

The gun issue took on renewed urgency among Democrats after mass shootings this summer in Dayton and El Paso. It was personified by El Paso resident and long-shot candidate Beto O'Rourke, who vowed to take away assault style weapons in a mandatory buy back program.

“This is a country that has produced the leadership that will ensure that we not only have universal background checks and red flag laws and end the sales of those weapons of war, but that we go the necessary steps further, as politically difficult as they may be. A gun registry in this country. Licensing for every American who owns a firearm. And every single one of those AR-15s and AK-47s will be bought back so they’re not on our streets, not in our homes, do not take the lives of our fellow Americans.”

But amid rapid-fire Twitter posts ripping the impeachment inquiry, President Trump suggests that "legislation on gun safety" and most anything else may now be off the table.

If so, Democrats may be left with this frustrated appeal from Biden's video:

“We say to the students and families. Our thoughts and prayers. Our Thoughts and Prayers. I think it’s premature to be discussing legislative solutions."

Sen. Chris Murphy of Connecticut had been negotiating with the Trump administration on gun policy. His phone has gone silent. He says he's hopeful that talks can resume, but adds: "I acknowledge that a lot of clamoring for impeachment is not helpful."

“I want to start by pausing for a minute to recognize what’s happened in El Paso, in Dayton. We have a gun crisis in this country. The overwhelming majority of Americans know that we need to make some sensible changes, and they know what those changes are."