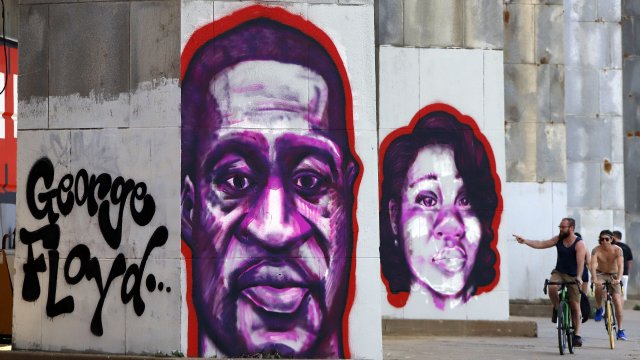 Jury selection has begun in the murder trial of Derek Chauvin, the Minneapolis police officer who kneeled on George Floyd’s neck for almost nine minutes.

While the city of Minneapolis is gearing up for a lengthy trial, in Louisville, activists are still fighting for the killers of Breonna Taylor to have their day in court.

"We know what happened to her, and we know that they murdered her. We just didn’t see it but we know it. That’s the only difference: We saw his on national television, all over the world," said Tyra Walker, co-chair of the Kentucky Alliance Against Racist and Political Repression.

Like George Floyd, Breonna Taylor became a national symbol for the fight against police brutality after Louisville Metro Police officers shot and killed her in her home. One year later, the anniversary of her death comes days after Chauvin’s trial begins.

None of the officers who shot Breonna Taylor are facing charges for her death. One officer, Brett Hankison, is being tried for blindly firing his weapon into Taylor’s apartment complex. But unlike Chauvin, Hankison is charged with endangering Taylor’s neighbors, not killing Taylor herself.

"The officers were attempting to serve a warrant in the Breonna Taylor case. They were fired upon by someone who was perhaps justified in his belief in his response," said Ashley Heiberger, senior policy adviser of Rosenbaum & Associates. "However, as we said earlier, once officers are fired upon, they're generally justified in returning fire. And we didn't have that dynamic taking place in the George Floyd case."

It’s rare for police officers to be charged for killing someone while on duty.

Since 2015, police officers across the country have shot and killed about 1,000 people per year. Eighty of these officers have been charged with murder or manslaughter. In Louisville, this hasn’t happened since 2004.

And 19 officers nationwide have been convicted of these charges.

"A lot of people are suggesting that this is a game-changer," said Phil Stinson a professor of Bowling Green State University Criminal Justice Program. "We think, well, maybe we've actually hit a tipping point here where there's going to be meaningful change. And I just don't see it."

Breonna Taylor’s family and activists have planned a nationwide weekend of action in her memory, but no trial for her death is in the works.