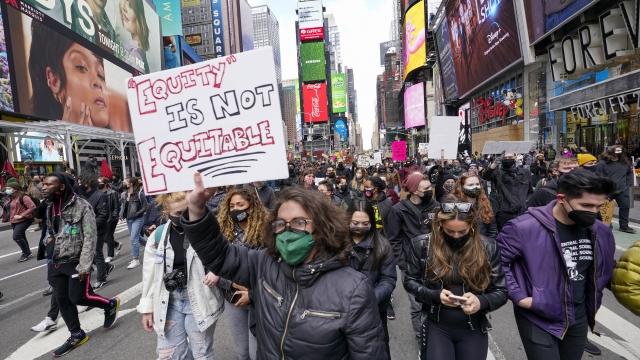 As theaters across the country recover from a year of shuttered stages, the industry's artists are galvanized to rebuild a more inclusive industry and — through art — continue the past year's conversations on racial justice.

"I was biking one day, and listening to '12 Angry Men' – the original – and was just struck so deeply by how the conversation was so relevant to what was going on at the time around the George Floyd case, and Breonna Taylor," said playwright and director, TaNisha Fordham.

During the height of the protests for racial justice, Fordham wrote "12 Mo' Angry Men," which is a modern re-envisioning of Reginald Rose's classic play about justice and inequality.

Telling the story of a jury deliberating on a White police officer who shot and killed a Black teen, the play debuted in New Jersey over the summer. It'll be headed off to Broadway later this year.

"It sparked some really great conversations, and I think it will continue to do so," Fordham said.

But despite the prestige of a New York City stage, Fordham says she hopes "12 Mo' Angry Men" can reach smaller communities around the country.

"It's cool to be on Broadway," she said. "It's awesome that there are all of these Brown and Black voices that are being represented on Broadway as it opens. But the truth of the matter is, those shows will only be there for 60 days, for 90 days, for six months. And there's still some little Brown child or some Asian child or some White child who doesn't feel empowered in the community where we live."

"Broadway, Off-Broadway, stages across the nation – if we do not see images of us, of our world that reflects the way we believe the world should be, then it is our job as artists, as speakers, as the people who hold the mic to say the things that are important to us," Fordham said.