How The Droids Of 'Star Wars' Could Inspire Artificial Intelligence 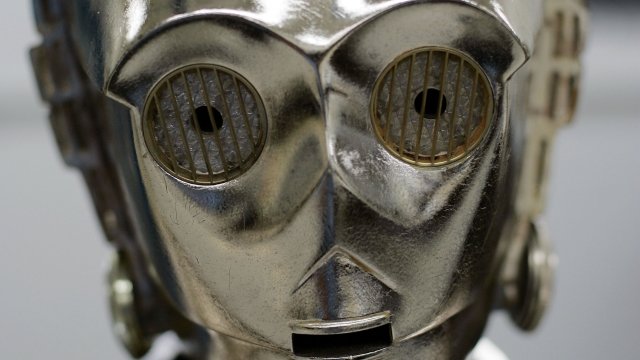 SMS
How The Droids Of 'Star Wars' Could Inspire Artificial Intelligence
By Evan Thomas
By Evan Thomas
May 3, 2018
The future of self-aware robots could look a lot like the droids from "Star Wars."
SHOW TRANSCRIPT

In some ways, the robots of "Star Wars" are closer to humans than machines. Droids like C-3P0 and R2-D2 are capable of independent thought and spontaneous problem-solving. They're self-aware. And they represent a future for robotics that we might achieve someday.

We already see aspects of "Star Wars" robots in today's machines. They look a bit like C-3PO or get around like R2-D2.

And we're starting to communicate with machines using natural human language. We can give robots commands to walk around or sit down. If they know enough about their environments — like "food is stored in the fridge," for example — we can hold basic conversations.

Robots with hands or feet can understand where their limbs are. Some quadcopters know when their batteries get low. And our machines can even learn. IBM's Watson uses huge data sets to get better at everything from making medical recommendations to preparing tax returns. 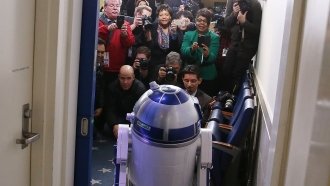 What Can 'Star Wars' Droids Teach Us About Building Better Robots?

But we haven't cracked true self-awareness yet. Scientists aren't even sure how it works in our own brains, much less in artificial ones. A robot that thinks for itself would likely depend not just on advances in robotics but also in mathematics, computer engineering, biology and psychology.

So some engineers think we'll see specialist robots before truly intelligent ones arrive. They would be designed for specific jobs, from search and rescue to deep space travel to cooking. Like Watson — or BB-8 — they would have deep enough knowledge of specific fields to problem-solve and improvise.

And it's likely the droids we know from movies will continue to inspire our efforts, especially if the goal is a self-aware machine.