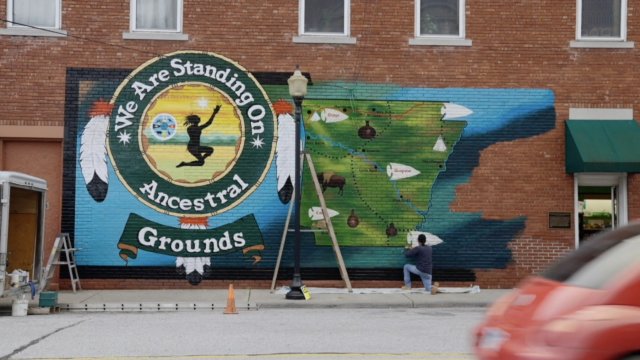 SMS
Arkansas Town Works To Reform Its Racist History
By Dan Grossman
By Dan Grossman
December 9, 2021
Harrison, Arkansas, has attracted KKK sympathizers through the years. But now, residents are trying to change the town's reputation.

As the U.S. continues to discuss and learn about the inequities that communities of color face, there is often the question, "Has anything changed?" One rural Arkansas town is trying to use its past to show change is possible and happening.

"I see Harrison as a progressive community," resident Elizabeth Darden said. "There are some older folks, older generations that like things ... to stay a certain way, but I feel like the growth and different businesses coming into town, I feel like they're a lot more accepting of different backgrounds and cultures."

Darden's son Malachi is a boy of few words, but at 9 years old, he has already experienced what few others in the town have.

"There are times where people will try to touch their hair because it's a little different, and he doesn't like that, you know?" Darden said. "So, there are instances like that I know he would like to change."

The town is sometimes given a different title: the most racist town in America. It's one that lifetime resident Layne Ragsdale has been trying to escape for decades.

"The reputation was much worse of our community than what we had understood," Ragsdale said. "It affects our business environment. It affects what our kids face when they go away to school. It affects what teams think when they come to our town to play."

Just 15 miles north of Harrison is where the KKK claims its headquarters. It's what has given this place the unflattering moniker. Throughout its history, Harrison has attracted a subgroup of people sympathetic to the Klan. Over the years, they took over billboards and airwaves, spreading their message to anyone willing to listen. Yet people in the town, both Black and White, saw it as a chance to learn.

"I can tell you, without a doubt, that Harrison is not the most racist town in America," Kevin Cheri said.

Cheri has called this area home for most of his life.

"I think one of the things that makes Harrison special ... it's not its reputation, but actually to me, it's what people here are trying to do about it," Cheri said.

In 2014, Cheri joined the Harrison Community Task Force on Race Relations. Since 2002, the group has worked to bridge the divide between Harrison's lack of diversity and its dark past.

Whether it's holding Martin Luther King events, Black Lives Matter protests or taking students to predominantly Black communities all over Arkansas, the task force has offered the town something it has longed for: a new perspective.

"People I think are often shocked when they come in here and see how openly we address and talk about issues of race because we've had to," Ragsdale said. "Today, I think throughout the United States, most of White America is being forced into that conversation because it is so important, and we finally realized as a country how important it is."

As recently as six years ago, Harrison had four billboards promoting White pride and denouncing anti-racism. Today, there is one remaining, as landowners work to remove them and replace them with murals promoting diversity.

"Harrison cares," Cheri said. "We care about ... a national issue, and we are just as concerned and interested to be involved in making change as anyone else."

The town only has about 13,000 people, but it is proof of the progress that can come from a conversation that many more Americans are having.

"I once had a fear to move here, but now, after seeing all the steps that they've taken to help erase the stains of hatred, I see this town becoming an awesome community," Darden said. "It already is an awesome community. We're doing great things here.”