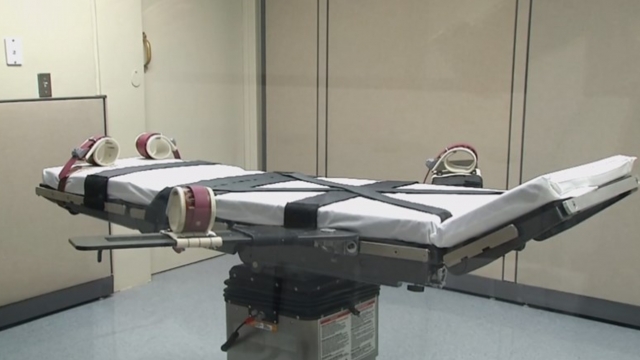 SMS
Arkansas' Plan To Execute 7 Inmates In 11 Days Has Been Halted
By Grant Suneson
By Grant Suneson
April 15, 2017
A judge ruled Arkansas misled a drug company to get access to one of its drugs to use in lethal injections.
SHOW TRANSCRIPT

A judge delayed the executions of seven Arkansas death row inmates, ruling the state couldn't use a drug it had planned to use as part of lethal injections.

Pharmaceutical distributor McKesson Corp. said the Arkansas Department of Correction misled the company to get the paralytic drug vecuronium bromide. The company has a policy against its products being used in lethal injections.

The judge ruled that using the drug would damage McKesson's brand and that the state could get different drugs later. Arkansas scheduled seven executions in 11 days partly because its supply of the sedative midazolam is set to expire within the month.

Midazolam is a controversial sedative. It's been tied to botched executions in the past, and Arkansas may not be able to get more.

Another judge issued a separate ruling to halt the executions after attorneys for the inmates claimed Arkansas made it too difficult for them to have access to their clients.

The series of executions has drawn scrutiny from around the world. Protesters demonstrated in opposition to the death penalty. Others have questioned whether the drugs are effective or humane.

Arkansas Gov. Asa Hutchinson wants the state to move forward with the executions and said corrections workers would do the job quickly and humanely.

"They're experienced, they're trained, they're practiced and it gave me confidence that they're going to approach this in a very professional and serious manner," Hutchinson said of the Arkansas Department of Correction.