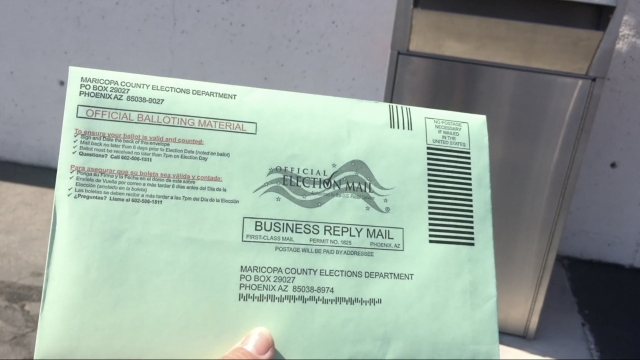 While Democrats in Congress are focused on passing their sweeping election reform bill, states across the country are plowing ahead with their own legislation.

SB 1485 changes the permanency of the state's Permanent Early Voter List. Now, if someone goes four years without mailing back their ballot, the state will ask if they want to remain on the list. If the voter doesn't respond, they'll stop receiving mail-in ballots automatically.

"Some people in Arizona have become very accustomed to this permanent absentee process and are expecting a ballot to arrive. And for many of them, that's actually a reminder that the election is coming, and it's time to do their homework and begin to study up on the issues and the candidates," said Barry Burden, a professor of political science and the director of the Elections Research Center at the University of Wisconsin - Madison.

That list is hugely popular — 75% of the state's registered voters are on it. But it's important to note anyone removed from the list will still be registered to vote in Arizona.

"It's not exactly disenfranchising, but it is an additional burden on those voters to take some action that they wouldn't normally have to take," said Burden.

Texas might be on deck as the next state to pass some kind of new voting law. SB 7 would make it a crime for election officials to send out unsolicited mail-in ballot applications and it would give poll watchers closer access during the election and ballot-counting process.

"What Texas is proposing — giving a lot of access, a lot of challenge possibilities to observers — is going to corrupt the process. They're just going to make it very difficult to conduct an election," said Matthew Weil, the director of the elections project at the Bipartisan Policy Center.

Some of the biggest election reform efforts have been happening in key 2020 swing states. But the new laws and proposed bills aren't necessarily a reaction to what happened in November. Take Florida as an example. The 2020 election in the Sunshine State was largely heralded as a success, but the Republican-led legislature decided to change their election laws anyway.

"But the fact that now the state has enacted a pretty sweeping set of election reforms says that those reforms are not a response to imperfections with what happened last year. It's about something else. It's about messaging to the party base," said Burden.

"We're seeing very restrictive laws proposed and then where they end up isn't that bad. And my thinking here is that it's easier to propose and get a lot of press about a very bad bill and the audience here might be for one, and then not do things that actually harm your political operation," said Weil.