Amid Soaring Costs And Debt, Can Trade Schools Make A Comeback? 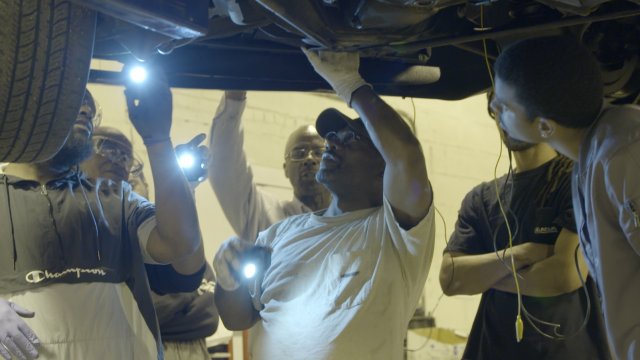 The rising cost of college and prospect of heavy student loans have students across the U.S. rethinking their plans after high school. And an age-old alternative to the bachelor’s degree is gaining new traction — trade schools.

"It can be a great choice for you, especially if you're working on a GED, haven't finished high schoo, don't think that college is [a] good route to go to. This can put you in opportunities for major businesses that are running today, like Metro or Ford dealerships," said Khalil Dockery.

Dockery is a student at Excel Automotive Institute in Washington, D.C., where he's training to work in the automotive mechanics field. While he hasn't completed the 18-month program in full yet, he already earned one of the certificates, allowing him to apply for full-time work if he wanted to. It's a stark difference to the four years that a bachelor's degree requires before being able to even land a job interview.

"As we went to a knowledge-based economy, there was a premium placed on those types of programs in the traditional academia route. There's definitely some pushback in these blue-collar jobs. But I think as the realities of a decade of student debt sinks in, people are reevaluating their options," said Anthony Hales, CEO of Excel Auto Institute.

According to Hales, the class size doubled at Excel in just the past year. He also says that other trade programs part of the D.C. Infrastructure Academy, like solar panel installation, has a waiting list for applicants.

"Students are looking at ways at, OK, how can I get a certificate to help me get into a place where I can find sustainable employment with eliminating some of the debt issues?” Hales said.

Questions remain about just how far students can get with vocational degrees, though. The average salary for an auto mechanic is just above $40,000. Pay for other common trade jobs, like electrician, carpenter and plumber all hover around the average salary in today’s workforce and below what workers with a bachelor’s degree or more make.

And trade schools haven't always kept pace with the modern economy. For example, the rise of automated trucks jeopardizes the career prospects for people learning to drive a big rig. Outsourcing has also cut into the value of vocational school.

"With the decline of unionization, because jobs were shipped overseas through globalization, the vocational schools fell down in importance," said Douglas McCabe, professor of management at the McDonough School of Business at Georgetown University.

Not all trade programs are subsidized like Excel, either. On average, it costs $33,000 for a trade school degree. But as some experts point out, that still doesn't compare to the cost of a bachelor's degree.

"It's certainly not the debt that they would face going to a four-year college or even on to graduate school," McCabe said.

Despite the many changes to trade jobs over time, administrators still see their programs at an advantage. And it's starting to catch on in Washington as well. Vocational education happens to be one of the few things currently supported by both sides of the aisle in Washington. A bipartisan bill intended to revamp career and technical education nationwide is set to go into effect this July. And on the 2020 campaign trail, candidates have made dealing with the cost of education a big issue.