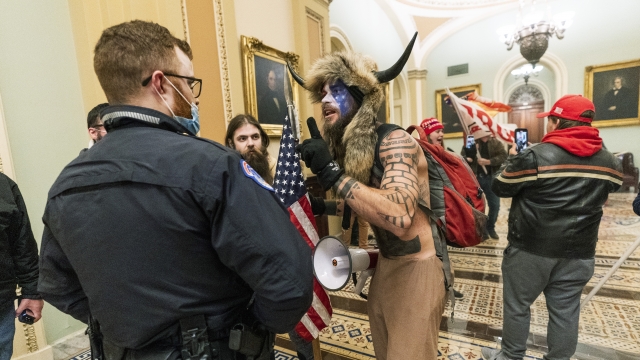 Two days after rioters stormed the U.S. Capitol, questions continue to mount about the police response to the mob — which   roamed freely on the Senate floor, destroyed property and forced a mass evacuation.

It took police hours to drive the mob out of the Capitol. Before they were gone, four people died, more than 50 police officers were injured, and officers confiscated guns and explosive devices.

Capitol police said they arrested 14 people on Wednesday.  In a statement Thursday morning, Capitol police chief Steven Sund said the attack "was unlike any I have ever experienced in my 30 years in law enforcement here in Washington, D.C."   Sund added that his police force “... had a robust plan established to address anticipated First Amendment activities.  But make no mistake – these mass riots were not First Amendment activities.”

Many were left with wondering why there were so few arrested on the scene. Assailants were seen on video being let go without being detained. One Capitol officer even took a selfie with members of the mob.

By Thursday afternoon, Sund announced he would resign his position later this month.

Senator Chuck Schumer said that, once Democrats take control of the Senate, he plans to fire the Sergeant at Arms, who oversees the Capitol police,

Washington D.C. Mayor Muriel Bowser  called the attacks a textbook case of terrorism that could not go unpunished, saying,

"I also call on the Joint Terrorism Task Force to investigate, arrest and prosecute any individual who entered the Capitol, destroyed property or incited acts of domestic terrorism."

Acting U.S. Attorney General Jeffrey Rosen announced, “Our criminal prosecutors have been working throughout the night with special agents and investigators ...to gather the evidence, identify perpetrators, and charge federal crimes where warranted.”

Washington D.C. police said Thursday that 68 arrests were made overnight - with most coming after a 6pm curfew was in place.  DC police have also now posted pictures of more “persons of interest” online, and are asking the public’s help in identifying and locating those responsible. The agency said it will share any tips with the FBI.

But they also have technology they could turn to, yet so far have not. In November, the Washington Post reported that authorities had turned to the previously unknown National Capital Region Facial Recognition Investigative Leads System to identify, and arrest a Black Lives Matter protester.

A spokesperson for the Metropolitan Washington Council on Governments, which oversees the system's operation across multiple law enforcement agencies, said it creates "a way to potentially identify individuals through video and photo evidence associated with a crime scene."

A picture from video can be searched against an existing database of arrest mug shots.

But the governmental council in charge of it told Newsy on that as of Thursday afternoon, it had not yet been contacted to help identify Capitol rioters.

“At this time... staff is not aware of any request for access to the database,” a spokesperson said.

Among those D.C. police posted online as a "person of interest" they hope to identify: an individual seen walking through the Senate shirtless, wearing a helmet with horns.  Newsy located an individual named Jake Angeli who acknowledged he was in the Capitol.

Angeli is a well-known QAnon supporter and a fixture in right-wing Arizona politics who is sometimes referred to as the QAnon shaman.   At the time we called him on Thursday morning he said he had not yet been contacted by anyone in law enforcement.

"I'm not really all that worried about it because in all honesty, like, I didn't do anything wrong. You know, I did not break any laws.  I walked through open doors. You know, I took a picture."

DC police say he is a person of interest and other officials have called for anyone who breached the Capitol to be arrested.    Angeli did tell Newsy there was one person who could have ended his own participation in the siege, sooner: President Donald J. Trump.

“I trust the president. And, you know, being a veteran myself and being a part of the Super Soldier program, I obey the orders of the president of the United States.”

Angeli texted Newsy Thursday evening to say that: “I know about what they are saying in DC. Not worried…”

Meg Hilling, a producer and reporter at Newsy, and Lauren Knapp, a senior video editor, contributed to this report.