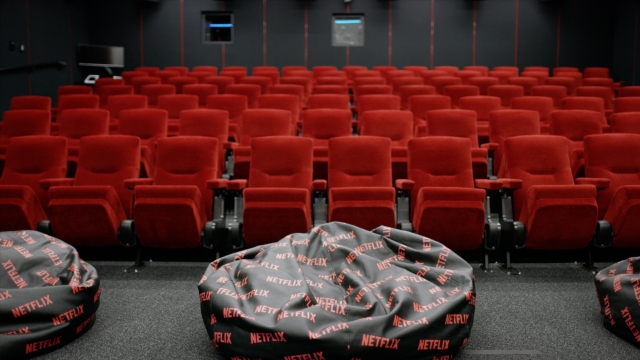 SMS
Experts Say Netflix's Theatrical Debuts Are Just 'Token Releases'
By Casey Mendoza
By Casey Mendoza
September 9, 2019
Netflix is debuting 10 movies in theaters this year. It's a non-traditional move, but not for the reasons you may think.
SHOW TRANSCRIPT

Going to a movie theater involves more than just watching a film on a bigger screen. It's a sensory experience, a social gathering and, when you consider box-office numbers, one of the most influential measures of success for a movie.

As of this summer, there are approximately 41,172 movie screens in the country. And last year, the U.S. and Canadian box offices grossed over $12 billion.

["They're literally making movies about every superhero."]

But outside the theater, an increasing number of people are also watching movies via streaming platforms in the comfort of their own homes.

Because of that, some outlets have started asking the question: Can movie theaters and streaming platforms co-exist? The National Association of Theatre Owners has an answer to that.

"People who really like movies like them in whatever way they can see them, right? So they're complimentary, provided that you give them their proper space for each particular thing. You know, they don't cannibalize each other when they're properly sequenced."

According to a study commissioned by the association, the people who stream the most movies online are typically the same people who most often see movies at the theater.

That indicates a mutually beneficial relationship between the two industries — but only if movies are given traditional 90-day theatrical releases.

"One of the arguments that we make is that a full theatrical release — and right now that means kind of an exclusive theatrical release, for the average right now is around three months — both gives the the movie time to find an audience to exploit complete potential theatrically ... and then it will also do better in the home."

"Netflix has made the argument that their subscribers want it, they want to get it out into theaters so people can have the choice. But to us, it's kind of a false choice when you have a really short window like that."

"So we've sort of characterized a lot of these really short windows as 'token releases,' so that you can say you have a theatrical release, but it's not really given the full potential of what that movie can do."