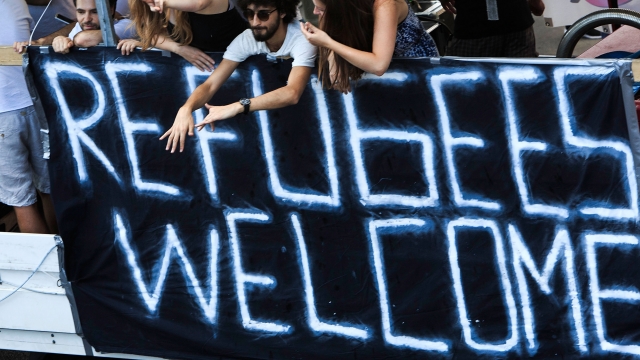 SMS
Are More People OK With Welcoming Refugees?
By Melissa Prax
By Melissa Prax
May 20, 2016
A new poll suggests most people in the world would welcome refugees, but that conclusion counters past findings.
SHOW TRANSCRIPT

Taking in refugees is somewhat controversial, but a new survey says 4 in 5 people across the globe are open to letting refugees in.

The Amnesty International study says out of 27 countries, the most welcoming were China, Germany and the U.K. That's based on citizens in those nations saying they'd let refugees stay with them or in their neighborhood.

The U.S. ranked in the middle, with Americans saying they were open to letting refugees in their cities or towns.

As for least welcoming, Russia took the bottom spot. It ranked considerably lower than any other.

Over 27,000 people were interviewed for the poll.

But these rankings paint a more welcoming picture for refugees compared to some past polls.

Last fall, a Pew Research Center study showed 44 percent of Americans think the U.S. should do more for refugees.

But the Amnesty International poll says 63 percent in the U.S. would say that.

Pew also says opinions on immigrants in the U.S. have a wide divide depending on generation. The most positive view came from millennials; seventy-six percent thought immigrants strengthened the country, but only 48 percent of baby boomers agreed.

The survey results also don't reflect the actions of these countries.

Chinese, German and British citizens are ranked as most open to letting refugees in, but a United Nations estimate of who's taken in the most from 2000-2014 showed only the U.K. made it into the top 20.

And while Turkey, Lebanon and the U.S. all ranked in the middle for being welcoming, in that 15-year span, they were the top three countries to take in refugees.