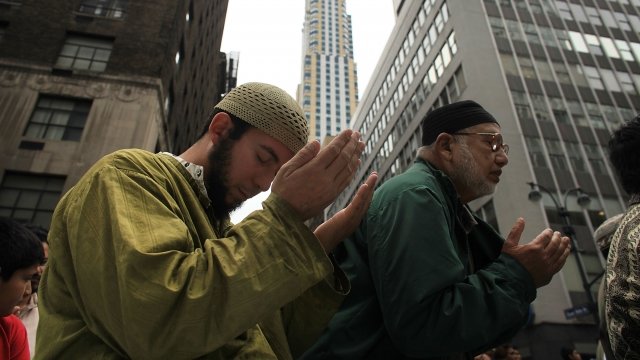 SMS
How Anti-Muslim Rhetoric Can Have A Normalizing Effect On The US
By Cat Sandoval
By Cat Sandoval
April 18, 2018
A study finds government officials in 49 states made anti-Muslim remarks and/or proposed anti-Islamic legislation since 2015.
SHOW TRANSCRIPT

"No one should be vetted with stupid, Islamophobic, hateful, bigoted questions before they can meet with their representatives," said Adam Soltani, executive director of the Council on American-Islamic Relations (CAIR) in Oklahoma. The questionnaire given to Muslim constituents by Republican state Rep. John Bennett reads: "The Koran, the sunna of Mohammed, and Sharia Law of all schools say that the husband can beat his wife. Do you beat your wife?"

Newsy reached out to Bennett, but received no comment. He told KFOR that he didn't refuse to meet with his constituents and that questions are based on Islamic texts. "This certainly does not mean that all Muslim men beat their wives, only that Islam permits them to do so," he said.

That instance was one of many identified in a BuzzFeed analysis that highlights anti-Muslim rhetoric. It found government officials in 49 states have made anti-Muslim remarks or proposed anti-Islamic legislation since 2015. In Rhode Island, Republican state Sen. Elaine Morgan emailed: "The Muslim religion and philosophy is to murder, rape, and decapitate anyone who is a non Muslim." In Nebraska, a state senator retweeted a message that Muslim immigrants should be forced to eat bacon. This directly affects the nearly 3.5 million Muslims living in the U.S. But it could also have a normalizing effect on the rest of the country.

BuzzFeed reporter Talal Ansari, who co-authored the analysis, said it was not meant to be exhaustive, but rather a comprehensive look at anti-Muslim rhetoric by officials nationally. He said: "At first we thought if it was over half, 25 states or above, that's significant. ... And then we easily reached 30-40 and reached to 49, it was alarming."

"We found instances in 49 states of elected officials saying something disparaging about Muslims or Islam; some states have multiple entries. We only used examples that we could find readily available either through internet clip searches, finding other news articles or groups that are sort of monitoring these sort of statements. ... And we would only put it down if it was 100 percent verifiable," Ansari said.

Utah was the only exception. It had anti-Muslim problems, too, but that happened beyond the time frame of the report. And anti-Muslim rhetoric may have had an influence on legislation. Last year, 14 states proposed anti-Sharia or anti-Islamic laws. Similar bills passed in Texas and Arkansas. Nationally, the administration's latest travel ban, which affects majority-Muslim countries, is still in effect and refugee resettlement from Muslim countries has slowed. 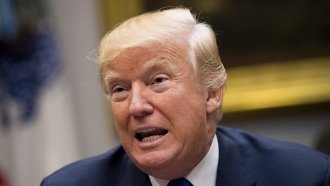 Nonpartisan group New America has cataloged 675 anti-Muslim activities in the U.S. since 2012. Assaults against Muslims between 2015 and 2016 surpassed levels from 2001, the year of 9/11. Ansari says some politicians haven't faced any consequences for using anti-Muslim rhetoric and suggests some may have even benefited from it.

"Islamophobia is offensive to me because it's dumb." Ahmed Rehab is the executive director of the Council on American-Islamic Relations (CAIR) Chicago. "All you need to do to understand how problematic these statements are just substitute Muslim for another group, and it will become apparent to you. Now, we need to get to a point where I don't need a substitution. ... Part of the problem is that Muslims are not on the table. We need to have Muslim voices at the table. We know our religion."

While it's easy to peg Islamophobia as a Muslim problem. Islamophobia is fundamentally un-American said Rehab. "It's hurtful not just in the Muslim community, by the way, but the very fabric and the very credibility into the very future of America as country."