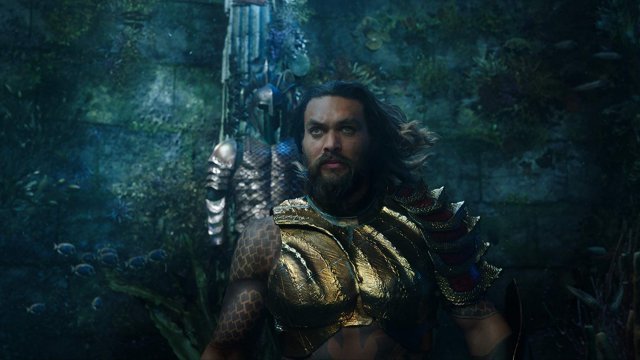 SMS
"Aquaman" Looks To Be The First DCEU Film To Cross $1 Billion
By Jamal Andress
By Jamal Andress
January 6, 2019
While "Wonder Woman" and others have made more domestic box office dollars, no DC extended universe film has made more money worldwide than "Aquaman."
SHOW TRANSCRIPT

Holding its place at No. 1 for a third weekend in a row is James Wan's "Aquaman" bringing in an estimated $30.7 million in its third week out. That pushes the domestic box office total all the way to $260 million.

And while 'Wonder Woman', "Suicide Squad" and others have made more box office dollars domestically, no DC Extended Universe Film has made more money worldwide than "Aquaman"

"Aquaman" has a worldwide box office total of $940 million, the next closest film in the series isn't close at all. "Batman V Superman: Dawn of Justice" ended its theater run with $873 million in worldwide ticket sales.

Taking the No. 2 spot this week is the only new wide release of the weekend. Saw's not-so-distant cousin "Escape Room" brought in an estimated $18 million in its first week out.

That's almost the exact same ($18.2M) amount of money the original "Saw" made in its 2004 silver screen debut — not that I see several sequels and spinoffs in 'Escape Room's' future.

In more good news for Sony Pictures, "Escape Room" only cost $9 million to produce which makes a better-than-expected $18 million debut all the better.

"Escape Room" carries a 53% on the tomatometer which isn't quite fresh but not necessarily rotten either. Film critics seem to be dispassionately split on the quality of the film.

Last but not least this week is "Mary Poppins Returns" bringing in an estimated $15.7 million in its third weekend out.

As for next week, Kevin Hart makes his Oscar bid. If you can't host, you might as well try to win.