AP: Trump To Meet With Merkel, Macron During NATO Summit 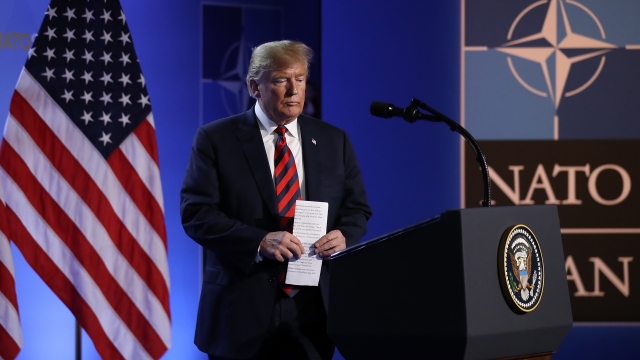 The meetings will happen less than a week after President Trump slashed the U.S.' contribution to NATO.

The White House says President Donald Trump will meet with German Chancellor Angela Merkel and French President Emmanuel Macron during the NATO summit, according to The Associated Press. The summit — which marks NATO's 70th anniversary — starts in London on Tuesday.

That's less than a week after President Trump slashed the amount of money the U.S. gives to the military alliance. President Trump has frequently criticized NATO, but the reduction in U.S. spending is largely symbolic. Germany has agreed to pay more to make up the difference.

AP reports that President Trump will also meet with the leaders of Denmark and Italy. He isn't currently scheduled to meet with British Prime Minister Boris Johnson or Turkish President Recep Tayyip Erdoğan.