AP Investigation: No Oversight Of Priests And Clergy Accused Of Abuse 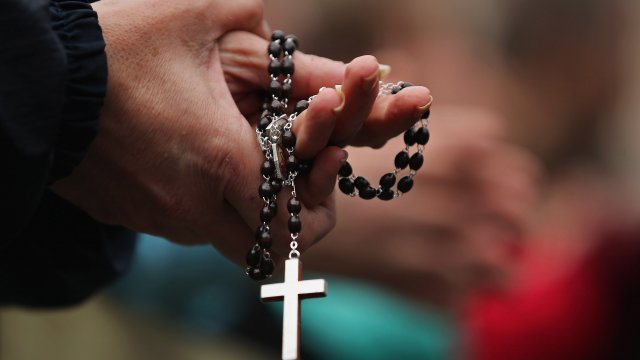 SMS
AP Investigation: No Oversight Of Priests And Clergy Accused Of Abuse
By Meg Hilling
By Meg Hilling
October 4, 2019
Hundreds of credibly accused abusers tied to the Catholic Church are living with no oversight and even working with children, according to the AP.
SHOW TRANSCRIPT

Hundreds of Catholic priests and clergy members accused of child sexual abuse are still living and working around children. That's according to a months long investigation by the Associated Press that found massive gaps in oversight of accused abusers.

According to the investigation released Thursday, nearly 1,700 living priests or church employees who have been named as credibly accused abusers are living without much oversight. 168 have continued working or volunteering in a church. 76 have current and valid licenses in education, medicine, counseling or social work. And 65 have been criminally charged since leaving the church — 15 of them with sexual assault or abuse. Another 76 of them couldn’t be located during the investigation.

So how does this happen? According to the Associated Press, each diocese determines its own standard to deem a priest credibly accused, and a majority of them were never criminally prosecuted. This leaves watchdogs and victims doing most of the work, as police and other authorities say their scope of supervision is limited to people convicted of crimes. The investigation lists multiple instances in which a lack of criminal prosecution has allowed abusers to be accepted into positions without employers knowing any history of their abuse accusations.

To add to the problem, if a credibly accused abuser is excommunicated from the church, they are no longer subject to any monitoring by the church that could come in the light of such accusations.

In recent years, multiple dioceses have released lists of clergy credibly accused of abuse. However, these lists may not be fully accurate. Earlier this year, the Archdiocese of Chicago said it left 22 names of accused priests off its list because they said those claims were unsubstantiated.

The AP's investigation casts a shadow on the church as the Vatican works to address worldwide reports of clergy abuse. In May, Pope Francis issued the first rule requiring officials in the church to report to their superiors cases of clergy sexual abuse and attempts to cover it up. But that law does not universally require church officials to report abuse accusations to the police and prosecutors.

Debate surrounding the actions of the church to further address accusations of sexual abuse claims only appear to be growing as more names and more lawsuits come to light. For example, last summer nearly 300 sexual abuse lawsuits were filed against New York's eight dioceses.