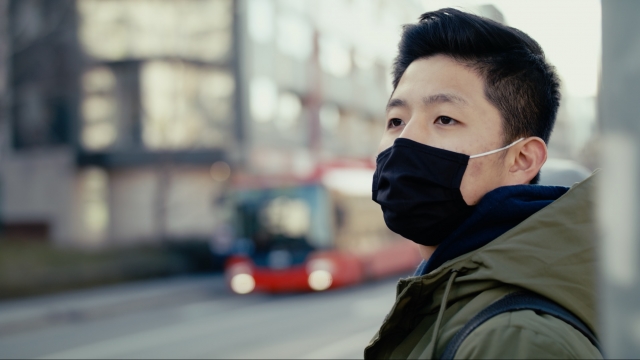 SMS
Anti-Asian Incidents Are Reportedly Rising Amid The Pandemic
By Cat Sandoval
By Cat Sandoval
July 22, 2020
From March 19 to July 1, Stop AAPI Hate recorded 2,173 anti-Asian incidents across the U.S. More than 850 occurred in California.
SHOW TRANSCRIPT

In Fairfax, Virginia, this was supposed to be a fun picnic, but instead Tara Bokum and her friends were harassed —

The man is 51-year-old James Lilly.

In the midst of the coronavirus pandemic, thousands of anti-Asian incidents have been reported around the country. The Fairfax Police Department tells Newsy Lilly was arrested for assault and disorderly conduct for another incident that happened a few hours later and they are currently investigating this specific incident.

"The part that was scariest was when he was like, 'I've a rock for your head'."

Elementary school teacher Tara Bokum says she started filming in case the altercation escalated even more. Bokum: "My friends and I were honestly shocked because this is kind of something you always see on the internet. And none of us have had this first-hand experience where someone was attacking us for no reason for our race."

Like Bokum, others have filmed incidents of hate. In New York City, a man sprays a cleaning solution on a passenger. In Santa Fe, New Mexico, "White power" and "Trump 2020" were scrawled on walls. Owners at the Indian restaurant estimate the vandalism cost $100,000 in damage. In California, this CEO stepped down after his racist rant went viral. Also in California, an elderly man collecting cans was attacked.

There is no federal data on Asian American hate crimes amid the COVID-19 pandemic, so Stop AAPI Hate started tracking incidents. They’ve noted over 2,000 nationally. In California, there were more than 850 discriminatory incidents. In New York state, more than 300 self-reported cases. And there's an uptick. Last year, in its first quarter, the NYPD reported three anti-Asian hate crimes in New York City; this year, it jumped to 11 cases.

"I just think it's so humiliating and debasing."

Russell Jeung, who founded STOP AAPI Hate, says based on the data, children, the elderly and women were attacked more than men.

Jeung: "People are angry, people are fearful, and people want to take out their anger on scapegoats. ... Because the coronavirus comes from China, we expected more Chinese to be attacked. And 40% of our respondents are Chinese. But 60% are non-Chinese, which shows that this anti-Asian hate is the case of racial profiling. It's anybody who looks Chinese are getting targeted."

Jeung teaches Asian American Studies. And he says anti-Asian attacks is history repeating itself by racializing the disease.

And that's why the World Health Organization strongly advises against the terms "Chinese Virus" and "China Virus": because they can lead to racial profiling. Currently, two congressional bills have been introduced that propose federal data collection on anti-Asian hate crimes and investigations and prosecutions of perpetrators.