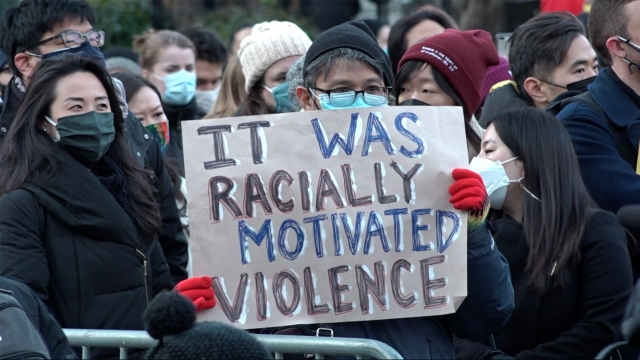 Experts say deeply relating to the victims of anti-Asian violence is part of a collective trauma for many Asian Americans.

The toll of anti-Asian incidents during this pandemic goes beyond physical attacks. For many Asian Americans and Pacific Islanders— or AAPIs — it could also lead to sleep troubles, depression and PTSD. That's because, psychologists we spoke to say, anti-Asian hate impacts not only the victims — it can also have mental health impacts on those indirectly exposed—through watching viral videos or doom scrolling online.

"Racialized distrust or trauma can lead to very detrimental health complications. So in addition to disturbed sleep and eating, you can also develop bad habits that lead to things like hypertension and diabetes," says psychologist Michi Fu.

And one factor that makes the mental health impacts even more notable? Several studies of different AAPI groups suggest lower rates of seeking mental health treatment than other races.

"It's largely because they've been taught to keep their heads down and to work hard and try and work out their differences among themselves," said Fu. "It's different than with other groups because there's implications for your entire clan, not just the person. .... When you out yourself as having an issue, this could have implications for the rest of your family."

But why do we feel a psychological impact in the first place? Let's break down two different types of trauma here. After the Atlanta shooting that left eight people dead, six of whom were Asian women, many were fearful.

"The reality is that this could have been me or my sister or my family," says Umi Akiyoshi, who attended a New York City vigil honoring the victims of anti-Asian hate.

Psychologist Kevin Nadal says deeply relating to the victims or to the survivors is part of a collective trauma.

"Collective trauma is the notion that people of any given group may have a response to a traumatic event. This is a collective sense of pain, hurt, suffering," said Kevin Nadal. "Asian American women … may be experiencing even more of a specific type of collective trauma because of their sense of connection to the people who were killed."

"As a Korean American, what breaks my heart the most is that. I think about my grandmother. And just can't imagine her being in that situation," said Sung Yeon Chiomorrow, executive director of National Asian Pacific American Women's Forum (NAPAWF).

There's also historical trauma, a theory that a populations' agonizing experience of physical or psychological stress can be passed to future generations

"... Chinese Exclusion Act, the internment camps in World War Two, that basically swept up over a hundred thousand Japanese Americans simply because of their heritage," says  Fu.

So let's talk about solutions. What can members of communities facing hate do to deal with the psychological impacts? Our experts say talk to someone: a friend, family, or a professional about your feelings or any physical pain, do things that make you feel safe like walking in pairs, and lastly — solutions shouldn't rely on the shoulders of AAPI's alone.

"I think it's important to acknowledge the systemic role of racism in our society because we can't just rely on the survivors of violence or the survivors of discrimination to to develop strategies," said Nadal.

Nadal says acknowledging that anti-Asian racism exists is the first step, then education— like teaching AAPI history in classrooms to combat bias.

A survey found 90% of Asian American entrepreneurs over age 45 reported revenue loss amid the pandemic.

As rent prices and landlord harassment increase, grocery stores and medical providers are forced to close in Los Angeles' Chinatown and Little Tokyo.

Rose Ave Bakery is taking the effort it used to adapt during COVID-19 and applying it to the fight against anti-Asian hate.