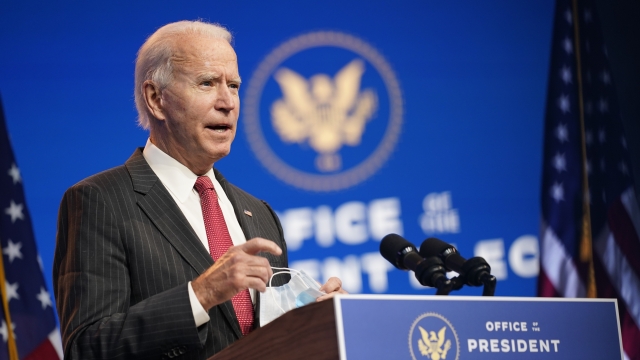 SMS
Pres. Trump's Records Could Pose Another Hurdle For Biden Transition
By Shira Tarlo
By Shira Tarlo
November 22, 2020
Reports suggest President Trump has a habit of tearing up his papers, a major concern for ethics watchdogs and lawmakers during the transition period.
SHOW TRANSCRIPT

With President Trump in the final weeks of his White House tenure, ethics watchdogs and top Democrats in Congress have become increasingly concerned his administration is illegally destroying or failing to keep official documents.

"What's happened in the last few years is the National Archives has been giving departments and agencies permission to destroy records that almost anybody would consider not just historically significant but important even in the near term in terms of political accountability and also in terms of continuity of government," Matthew Connelly, a professor of international and global history at Columbia University, said in an interview.

Matthew Connelly leads the History Lab at Columbia University, which has gathered over 3 million declassified documents as part of its Freedom of Information Archive. He says for the public to truly hold government leaders accountable, it needs to see the evidence.

"Let's say that you're appointed to the Biden administration and you'd like to stop the practice of separating children from their parents, and let's say you might even, as they've already announced, they want to reunite these families. Well, how are you going to do that if Immigration and Customs Enforcement has already started to destroy records dating back to the first months of the Trump administration?" Connelly said.

Reports suggest President Trump has a habit of tearing up his papers and concealing documents detailing his meetings with foreign leaders. His top officials have reportedly used personal email accounts and encrypted messaging apps, and others have been sued for allegedly breaking federal records laws.

The concern has led watchdog groups and nearly two dozen Democratic lawmakers to send letters to the White House and over 50 federal agencies, demanding they keep all administration documents — as mandated by federal law — ahead of the transfer of power.

"I'm particularly concerned about the preservation of records for people who are going to want to cover their tracks," Norman Ornstein, a resident scholar at the American Enterprise Institute, told reporters last week.

The National Archives told Newsy it "takes its records management responsibilities seriously and has worked with the White House from the beginning of the administration to provide guidance with regard to the Presidential Records Act." It said specific questions about the current administration’s policies and practices should be referred to the White House.

The White House did not respond to Newsy's request for comment by time of publication.

And what records might be missing from the White House after Jan. 20 is difficult to predict.

The Presidential Records Act requires the president and vice president to preserve and make public records that relate to their official duties five years after they leave office, with presidents able to restrict access to sensitive documents for up to 12 years. But experts say the Act is seldom enforced.

"The reason why we have this law is precisely for reasons of say, presidential administrations and how they transition from one to the next, and we want to preserve the institutional memory right of these different departments and agencies," Connelly explained.