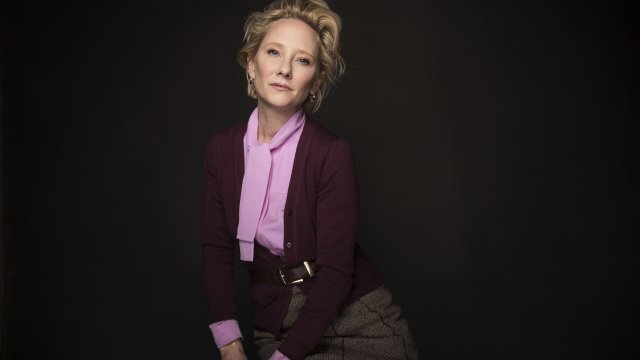 SMS
Anne Heche Declared Dead A Week After Fiery Crash In Los Angeles
By James Packard
By James Packard
August 12, 2022
A fiery crash into a home put Anne Heche into a coma, then she was kept on life support to allow for possible organ donation.

A darling of the small and big screen and a trailblazer for equality, she leaves an indelible legacy of kindness on an industry often mired in cruelty.

Heche found fame in the 1990s through a series of film and TV roles, including opposite Al Pacino and Johnny Depp in "Donnie Brasco," a role in "I Know What You Did Last Summer" and a leading role in "Six Days Seven Nights" with Harrison Ford.

But it was her life off screen that she says iced her out of the industry for years.

Her three-year relationship with Ellen Degeneres, who reacted to the news Friday, generated endless headlines and hate.

She said she wasn’t allowed to bring Degeneres to the premiere for her movie "Volcano." She did anyway and was kicked out.

In 2020, Heche told Entertainment Tonight how she thinks about those years.

"What I was talking about was a little bit more of a concept that love is a choice," Heche said. "I made one, and it was one of the most life-changing choices of my life. And I stand up for that... I would do the same thing all over again.”

Her later relationships gave her two sons, now ages 20 and 13.

Her older son gave a statement to People Magazine saying, "After six days of almost unbelievable emotional swings, I am left with a deep, wordless sadness. Hopefully my mom is free from pain and beginning to explore what I like to imagine as her eternal freedom."

It was a fiery crash into a home last week that put the actress in a coma. She was kept on life support until Friday afternoon to allow time for possible organ donation. Under current California law, death can be determined by the loss of all brain function and in accordance with accepted medical standards.

Authorities had previously said she was under investigation for DUI related to the crash, and police say a blood test reveals she had narcotics in her system.

Heche had lived with mental health challenges for years, saying in her 2001 memoir childhood sexual abuse triggered mental illness that left her thinking she was two people — one being from another dimension.

The woman whose home was destroyed in the crash publicly greived for Heche on Instagram Friday, saying in a video post, "Her family and her friends and her children especially really have suffered a great loss, and my heart goes out for them. This entire situation is tragic, and there really just are no words. I’m sending love to everybody involved."

It's a terrible end to a life challenged by darkness, but remembered for its love and joy.