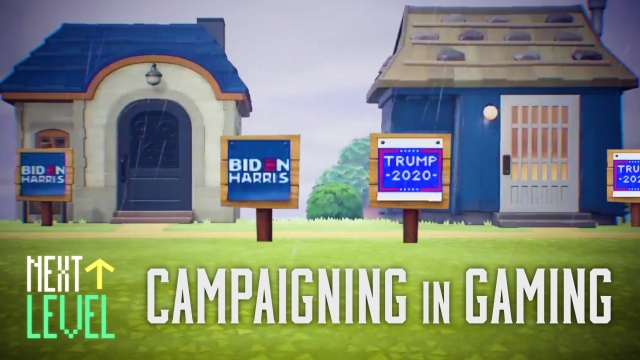 SMS
Political Outreach Enters The World Of 'Animal Crossing'
By Matt Picht
By Matt Picht
October 13, 2020
With the pandemic making traditional campaigning more risky, some 2020 campaigns are reaching out to voters through gaming.
SHOW TRANSCRIPT

Election season in the U.S. has been a little different this year. The pandemic has made traditional get-out-the-vote drives more risky, forcing political campaigns to turn to digital methods of campaigning.

With that in mind, campaigns are going further than ever to reach out to voters through gaming — using the virtual worlds of video games for a new kind of political mobilization.

Gaming's biggest moment in the campaign trail came in early September, when the Biden campaign released officially sanctioned yard signs and clothing patterns for use in the video game "Animal Crossing: New Horizons."

"Animal Crossing" became a viral sensation when it released in March 2020, back when social distancing began to really kick in. The game drew attention from some politicians back then as well — Rep. Alexandria Ocasio-Cortez of New York, as well as some candidates from Florida’s Democratic Party, experimented with using it for voter outreach.

But the Biden campaign’s fairly extensive catalog of official in-game signs represent a new level of outreach — trying to get "Animal Crossing" players to redecorate their island for Biden.

There's plenty of user-generated content supporting President Trump, despite no formal products from the campaign.

"In the past, people have tried to sell products and video games, based on the demographic that that game reaches."

Elena Bertozzi is a professor of game design and development at Quinnipiac University.

But it's not clear how effective such tactics are: unlike other forms of advertising, video game companies can still be enigmas when it comes to assessing how influential their content is.

"What I think is interesting is that the game company allowed a political message inside of the game. … It really opens a whole new Pandora's box of, you know, of what could happen inside of games, in terms of advertising of different kinds."

The prolonged social distancing needed to fight the pandemic has left over half of the country feeling more isolated and lonely than before, according to a Newsy/Ipsos poll. With real-life options limited, Americans have been adopting more virtual methods to mingle — including by playing more video games.

"Animal Crossing" gives its players a uniquely tangible outlet for socializing with their friends: you can't bop someone over the head with a net in a Zoom call, after all.

Asserting identity, political or otherwise, is a key part of "Animal Crossing's" attraction. The ability to take a digital space and customize it to your liking makes the game unique.

"Animal Crossing and other games kind of like it are playful spaces, and they are interactive. So they allow us to actively engage others and have these shared experiences."

Dr. Rachel Kowert runs the non-profit group Take This, which studies games from a mental health perspective. She says the game offers something people aren't getting from other methods of digital interaction.

Ultimately, "Animal Crossing" is appealing because of the contrast it draws to the real world. Bringing political allegiances into the game is just another way for players to exert control over the digital space that they might be lacking in the real world.

"We're very socially isolated. We are feeling a little out of control, right, we can't really control our environment. So what better game to have than one where you're creating your own island, your own house, your land, your own little society."