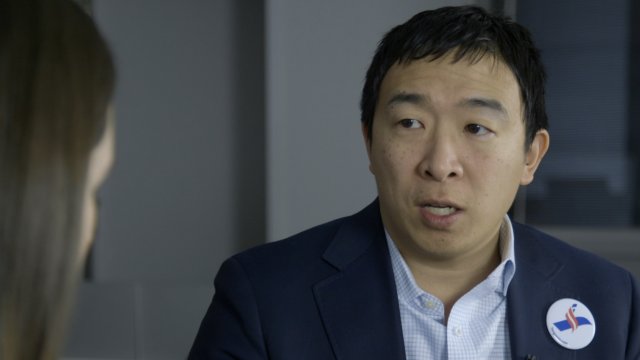 Andrew Yang might not be the biggest name in a jam-packed field of 2020 Democrats, but the entrepreneur has some of the most attention-grabbing ideas when it comes to economic policy — mainly, universal basic income.

"We need to do this because technology's now advancing to a point where it's going to displace many, many people out of retail jobs, call center jobs, trucking jobs, and on and on through the economy," Yang said.

He calls it the Freedom Dividend, an opt-in program that would supply every American 18 years and up with $1,000 a month. It would be paid for by the consolidation of funds already being spent on assistance programs, like food stamps, and a value-added tax. Critics say it's a form of socialism, but Yang argues it's a way of declaring a dividend for ourselves as shareholders of our country.

"What we really have to do is to evolve to an economic system that works for us, that revolves around us," Yang said. "What I say about Universal Basic Income is it's not socialism. It's capitalism where income doesn't start at zero.”

While his campaign for basic income put him in the spotlight, Yang has other economic proposals vastly different than his Democratic counterparts. That includes wanting to change the way we measure the economy.

"America's life expectancy has declined for the last three years, suicides and drug overdoses are at record highs, mental health is reaching, unfortunately, crisis levels in terms of depression and anxiety. So GDP is record-high, but we're disintegrating in many aspects of our society. We need to change the measurements to things that reflect how we're doing, things like mental health and freedom from substance abuse, income and affordability, childhood success rates, environmental sustainability," Yang said.

Yang's 2020 campaign marks his first foray into politics. He has spent most of his life as an entrepreneur and has a steep hill to climb. Polling shows him far behind declared Democrats like Elizabeth Warren or Kamala Harris. And he won't qualify for the primary debates in June unless he polls 1 percent in three different polls or gets enough donations. But he says he has no qualms about it.

"I was 1 percent or higher in the last Monmouth poll and that was nationwide, and most people are still getting to know me. So I'll be on the debate stage in June, no doubt about it," Yang said.