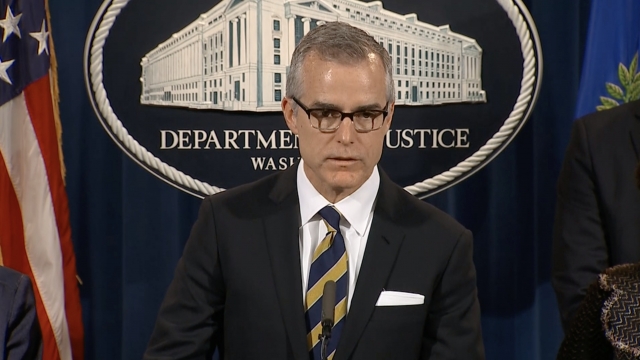 Former FBI Deputy Director Andrew McCabe filed a civil suit against the bureau and Department of Justice on Thursday. He argues his firing last year was unjust and politically motivated.

McCabe was fired March 16, 2018 for what he calls "unlawful retaliation for his refusal to pledge allegiance to a single man." That's pretty clearly a reference to President Donald Trump, who is named multiple times in the suit and who has characterized McCabe as being politically biased.

McCabe alleges he was targeted by the president's "unconstitutional plan and scheme to discredit and remove DOJ and FBI employees who were deemed to be his partisan opponents because they were not politically loyal to him."

McCabe was fired after the DOJ inspector general found he'd improperly authorized another official to speak to the press about an FBI investigation into the Clinton Foundation, and that he'd then misled investigators about his involvement. But McCabe says he gave investigators accurate information to the best of his ability.

The suit also alleges FBI Director Christopher Wray refused to tell McCabe why he was being fired, and that a DOJ lawyer told McCabe's attorney the department was "making it up as we go along." Wray is a named defendant in the suit, along with Attorney General William Barr.

Former FBI agent Peter Strzok also sued the bureau on Tuesday after being fired over derogatory text messages he sent about the president. Strzok says President Trump placed "unrelenting pressure" on the FBI to fire him.