Andrew McCabe Speaks Out After Being Fired 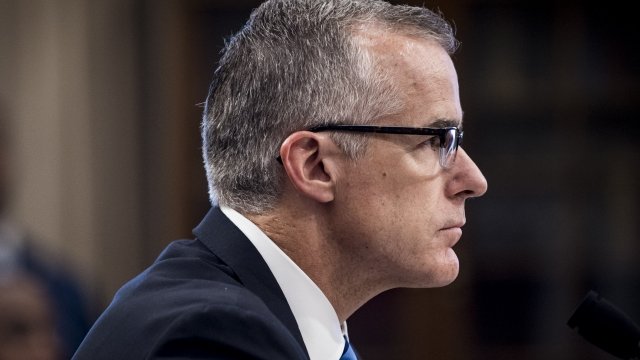 SMS
Andrew McCabe Speaks Out After Being Fired
By Jake Jones
By Jake Jones
March 17, 2018
Republicans painted him as a pro-Hillary Clinton deep state operative. He says that's all an effort to discredit the Russia investigation.
SHOW TRANSCRIPT

Andrew McCabe released a statement defending the actions that ultimately led to him being fired.

McCabe says his ousting was part of Republicans' effort to discredit the Russia investigation and special counsel Robert Mueller. McCabe is speculated to be a potential witness in the probe and could corroborate his former boss James Comey's statements.

McCabe rejects the Justice Department's not-yet-released report that he misled investigators and lacked candor, which is a fireable offense at the FBI. The unpublished report allegedly says McCabe authorized an FBI spokesman and lawyer to talk to the media about an investigation into the Clinton Foundation.

The bureau's Office of Professional Responsibility recommended McCabe be fired. Attorney General Jeff Sessions made that a reality on Friday, less than 48 hours before McCabe was set to retire with a pension.