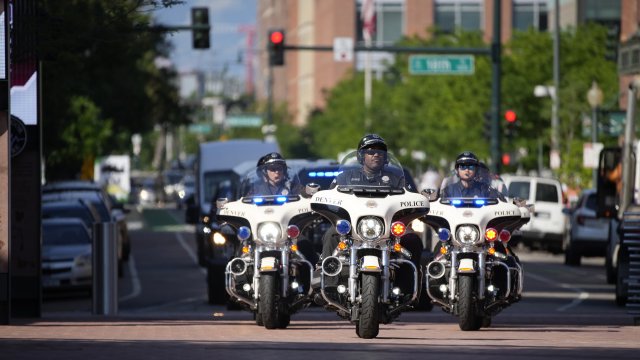 From the beginning of negotiations to pass the George Floyd Justice in Policing Act, a major sticking point has been qualified immunity — the broad legal protection that shields officers from lawsuits.

But in Colorado, police have been living with a qualified immunity ban for more than a year now.

In the weeks following the May 2020 death of George Floyd and the unrest that followed, Colorado's governor signed arguably the most sweeping statewide police reform bill in the country.

SB217 includes several popular reforms, like banning chokeholds, requiring body cameras and tracking use of force incidents. But it also features more controversial measures, like a ban on qualified immunity.

The qualified immunity ban allows citizens to bring individual lawsuits against Colorado police officers for alleged civil rights violations but places a $25,000 cap on potential judgments against them.

Brittney Gilliam filed the first lawsuit in the state since the qualified immunity ban took effect.

A video of Gilliam and four young girls in her family being handcuffed and held at gunpoint went viral back in August. Aurora police believed Gilliam was driving a stolen car. She wasn’t.

LANE: "There is abundant case law standing for the proposition that you don't point loaded guns at small children if you're a cop. Very simple."

LANE: "So hey, if the cop doesn't have the 25,000 bucks, oh, well, I guess they keep their job and we garnish their paychecks, you know, till it's satisfied, just like any other person who gets sued, and has to pay the bills. So it does, it causes cops to feel some pain."

Nationwide, proponents of qualified immunity say the longstanding legal doctrine is necessary to protect officers from frivolous lawsuits. But others say these protections have gone too far.

MCGOUGH: "I think the reason why it has so much focus is because it's gotten a bit ridiculous in how it's applied."

MCGOUGH: "There's this requirement that, you know, it has to be established that the specific action of the government official was unconstitutional. And courts have interpreted that clearly established rule in really bizarre ways."

In Colorado, many law enforcement leaders say some officers are quitting and specifically citing the qualified immunity ban as one of the reasons why.

In a statewide survey of Colorado police chiefs and county sheriffs, 65% of officers who left law enforcement in the past year cited concerns about the new police reform bill as one of their "top reasons" for resigning.

Bill Elder, sheriff in El Paso County, Colorado, said attrition rates in his department "doubled" since last year and "risks of civil litigation are among the top concerns."

NEWMAN: "There has not been some rash of frivolous lawsuits brought. In fact, the sky hasn't fallen at all."

Mari Newman is a civil rights attorney representing the family of Elijah McClain. McClain was killed by the Aurora Police Department in 2019.

NEWMAN: "If there are officers who don't want to continue to work in law enforcement because they'll be accountable for their actions, those are not officers we need."

Just this June, the Colorado legislature expanded its ban on qualified immunity to include Highway Patrol troopers and Colorado Bureau of Investigation officers.