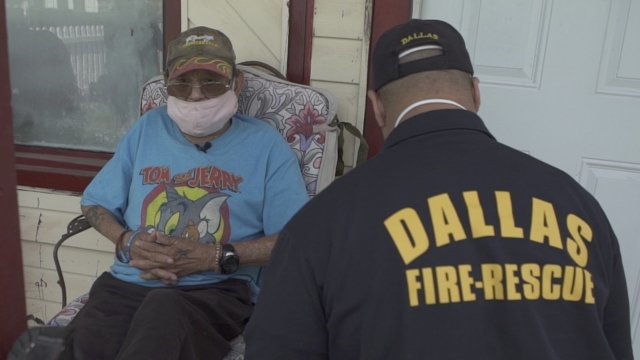 SMS
Providers Are Working To Swap Out Paused J&J COVID Vaccines
By Lindsey Theis
By Lindsey Theis
April 21, 2021
For many Americans, their long wait for a vaccine is now even longer thanks to the CDC recommendation to pause use of Johnson and Johnson's vaccine.
SHOW TRANSCRIPT

This is a long time coming for 75-year-old Albert Garza of Dallas. He hasn't left the house for months, scared of the coronavirus. On top of that, he’s been waiting more than a week to get his COVID-19 vaccine.

"The morning we were supposed to start the J&J vaccine, it was paused," Anthony Zamora of Dallas Fire-Rescue told Newsy.

Garza is one of 4,500 Meals on Wheels recipients who were set to get the J&J shot starting April 13 in Dallas. So he waited longer as officials worked to secure Moderna doses for homebound residents.

More than 2 million Americans are considered homebound. And experts tell Newsy for many of those patients, the Johnson and Johnson vaccine was appealing because transport requirements and the single dose made it easier.

People who don’t like needles, those in rural areas and younger people could also be impacted by the continued pause.

"J&J was our hope for vaccinating those who were under 18 or are under 18 in that they, in their studies, looked at younger populations," Dr. Anthony Harris, associate medical director at Workcare, said.

"Certainly not as easy as Johnson and Johnson, but it works," Chris Culak with the Visiting Nurse Association of Texas told Newsy by Zoom. He says the switch was mostly logistical on the back end. It would have been more stressful to switch to Pfizer, which has more rigid temperature requirements.

They had to replan where the shots would go using a routing system based on proximity. Teams go out in pairs, aiming to get vaccines to 10 households in about five to six hours.

"Some may be on the same street, some may be two or three blocks away, some may be a few miles away. But the idea is that it's a little tighter configuration because our system allows us to manage that," he said.

It’s also costing more to pay to set up the second dose appointments. The city of Dallas will have to pay EMTs for administering second doses as well.

"The gratification that we get when they get to receive it is a blessing. It’s definitely a blessing," EMT Robert Cover said.

As for Garza, that wait is almost over. One month and then two weeks more, and then he’s fully vaccinated.

"I feel good, it’s like I’m being taken care of. So I appreciate it," he said.