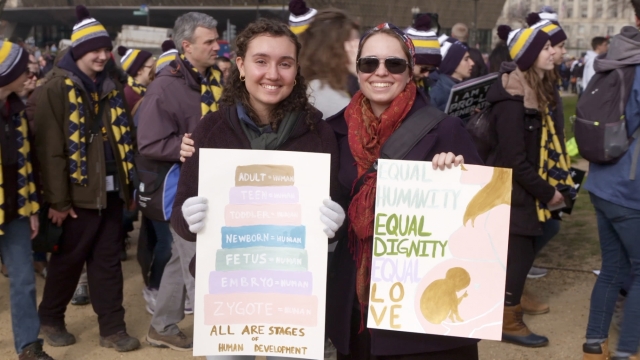 Nearly 50 years of data shows that more than 50% of Americans have conditional opinions about abortion.

"The Supreme Court today ruled that abortion is completely a private matter to be decided between mother and doctor ..."

Since the Roe v. Wade decision, there's been a lot of noise — for abortion, against abortion, pro-life, pro-choice. These labels dominate discussions around public opinion on the issue. But the loudest voices don’t speak for the majority of Americans. And the commonly shared opinion isn't written on a poster.

It is found between charted points of nearly 50 years of data. These lines tell a different story, and Tom Smith is the author. As director of the General Social Survey, Smith has worked with teams since 1972 to identify American public opinion on legalizing abortion.

“It’s a classic case in which it's not 'all or nothing',” Smith said.

Smith and his team asked American adults in households seven questions, like thoughts on abortion "if the woman can’t afford more children" or "if there’s a strong chance of serious defect." Their answers fell into three groups.

Take, for example, is it OK for a woman to want an abortion for any reason? It’s an absolute question that received an absolute response. An average of about 39% said yes, placing the majority closer to the pro-life camp. “And then in between is people who say some mix of yes, no, or don’t know. Well the majority of Americans are in that middle category,” Smith said.

Case in point: “Clearly you can have a middle ground,” Smith said.

“I don’t think that there is anything justifying it.” “That’s a slippery slope, and when I think about that it’s a soul.” “I’m a conservative, I’m a Trump supporter, that’s why I'm here for the president and I’m around these people with their convictions, but sometimes you have to have a compromise. And I don’t think Roe v. Wade should be overturned.” This, at a self-proclaimed  pro-life movement.

“If you go back to the very first time abortion was measured in 1965 and you look at the early trend, there’s a big shift to pro-abortion rights direction," Smith said, "but that ends in the mid-'70s, and abortion attitudes have been very stable since then."

Three factors contribute to that stability. One: The issue is not a moving target. “Abortion, the basic situation, is quite stable. There’s a choice. The choice about, there’s a pregnancy, what do you do with the pregnancy,” Smith said.

Two: Generations don’t have major differences in opinion on abortion. There isn’t much change when older generations age out and younger generations begin to lead social change.

And three: Good ol’ core values, especially when tied to religion. So when the noise inevitably ramps back up, remember to read between the data lines.