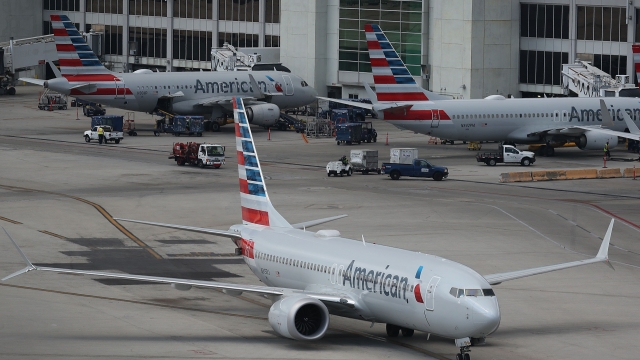 SMS
American Airlines Extends Cancellations Over Boeing 737 MAX Grounding
By Katherine Biek
By Katherine Biek
April 8, 2019
To account for the temporary loss of part of its fleet, American previously said it would cancel 90 flights each day through April 24.
SHOW TRANSCRIPT

American has 24 737 MAX planes in its fleet. Those planes, and all others operated by U.S. airlines, were grounded indefinitely on March 13 after two fatal crashes involving Boeing 737 MAX 8 aircraft.

To account for the temporary loss of part of its fleet, American previously said it would cancel 90 flights each day through April 24. But on Sunday, the airline said those cancellations would now extend through at least June 5.

Those 90 cancellations might seem like a lot — but it actually only represents a little more than 1 percent of American Airlines' 6,700 daily flights. The airline noted that customers who are affected by the cancellations will be contacted directly and given options to rebook their flight. If they choose not to rebook with American, they can request a full refund.

Things have been a bit more disrupted on Southwest Airlines, which was averaging about 130 flight cancellations a day in late March over the grounding of 737 MAX planes. Southwest warned that those daily cancellations could continue through May. It's also been dealing with a number of other cancellations due to a labor dispute.

Meanwhile, United Airlines has scheduled its flights in such a way that it doesn't foresee needing to cancel any future flights to make up for the loss of its Boeing 737 MAX planes.