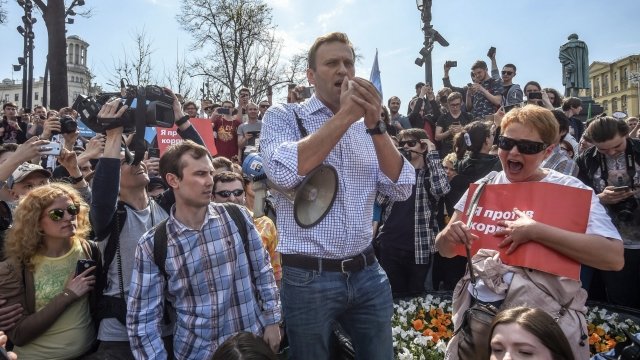 SMS
Russian Opposition Leader Reportedly Released From Police Custody
By Ethan Weston
By Ethan Weston
May 6, 2018
Navalny was arrested Saturday, along with over 1,000 other Russians, during anti-Putin protests.
SHOW TRANSCRIPT

Navalny was arrested Saturday along with over 1,000 others during protests against Russian President Vladimir Putin. Demonstrations took place in Moscow and several other cities across Russia.

In a tweet, Navalny said authorities wrote him up for organizing a rally and resisting police.

The protests and Navalny's arrest and subsequent release all come just ahead of Putin's inauguration Monday. Putin won re-election in March.

Navalny attempted to run against Putin, but the country's electoral commission barred him due to a previous fraud conviction. Navalny maintains that charge was politically motivated.