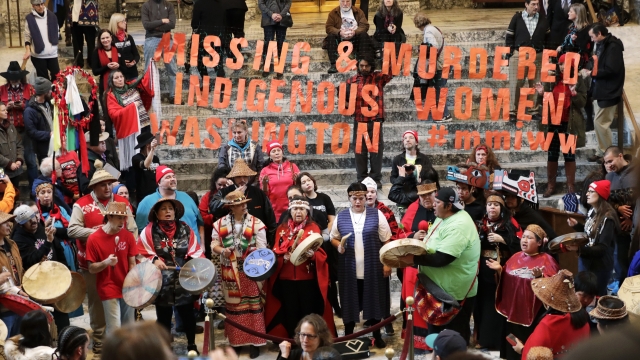 SMS
Alert System Aims To Help Find Missing, Murdered Indigenous Women
By Allison Herrera
By Allison Herrera
May 9, 2022
A woman talks about the inaction she experienced when her daughter went missing. Now a new alert system hopes to keep that from happening again.
SHOW TRANSCRIPT

Henny Scott was just 14 years old when she went missing in Lame Deer, Montana on the Northern Cheyenne Indian Reservation in December of 2018.

Henny's mom, Paula Castro, said authorities didn't issue an Amber Alert after she reported her daughter missing to the Bureau of Indian Affairs office in the nearby Crow agency.

"They just told me to fill out the paperwork, and they'll have somebody look into it," Castro said.

By the time federal and tribal officials did start looking for Henny, it was too late.

"Her paperwork just sat on this person's desk," Castro said. "That was out for Christmas vacation, and by the time he came back from his vacation, it was still sitting on his desk."

Castro and her husband Nate eventually formed a search party.

"It only took him four to six hours to find Henny when the law couldn't even find her in two weeks," Castro said.

According to the Department of Justice, Indigenous women and girls are 10 times more likely to go missing or be murdered, compared to the national average, and that lack of coordination and communication between state, tribal and federal officials is what leads to disappearances like Henny's never being investigated, advocates say.

Lawmakers across the country want to do something about it.

Washington State Rep. Debra Lekanoff is a citizen of the Tlingit Nation and represents the state's 40th district. She helped create a new alert system that works like an Amber or Silver Alert that flashes across electronic billboards on state highways and sends a message to your phone.

"If we go missing, the local tribal police will be contacted," Lekanoff said. "Local police, state police broadcasters will be contacted. I can't say that the model is that I'm sharing here is exactly what will happen, but I'm reflecting back on the Alzheimers, the silver alert system."

Rep. Lekanoff said the system still needs to be worked out — most importantly the issue of jurisdiction.

"They reach out at the local level to the state and then to the tribal community, and they all work together," Rep. Lekanoff said.

Yakama tribal citizen Patricia Whitefoot's sister Daisy went missing more than 30 years ago along the Columbia River after she had gone fishing with friends and family members. Daisy has never been found.

"You should be able to respond to the complexities that are involved and in the profession of law enforcement, but just non-communication is, you know, is just nonexistent," Whitefoot said. "I mean, what is this communication about? And I hear it time and time again from other families."

According to the Washington State Patrol, 114 Indigenous people are currently missing in the state. Nationally, that number is much higher according to statistics provided by the National Missing and Unidentified Persons System.

"My Republican and my Democratic [colleagues], both in the House and Senate, recognized that this is a bill that's needed because we didn't we knew that the women who needed to be found didn't care what government found you," Rep. Lekanoff said.

Washington State Gov. Jay Inslee signed the bill creating the new alert system in April. It goes into effect in the fall of 2022.

Henny Scott would have graduated from high school this year.

"I have a little bit of closure, but not a whole lot," Castro said. "I still want to, you know, get well. I want to reopen her case, but it's like I don't even think anything will be done because of the way it was investigated."