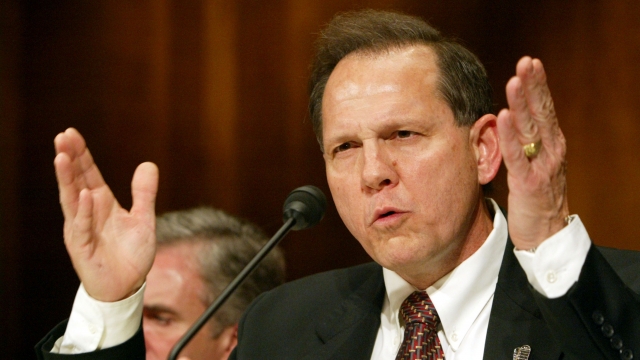 SMS
Alabama's Supreme Court Chief Justice Might Get Fired ... Again
By Cliff Judy
By Cliff Judy
May 7, 2016
Chief Justice Roy Moore has been suspended from the bench for "flagrant" abuse of authority in trying to enforce a former state ban on gay marriage.
SHOW TRANSCRIPT

The chief justice of Alabama's Supreme Court has been warned once again he's overstepping when trying to enforce a former ban on gay marriage, and this time, it could cost him his job.

"This is not about any wrongdoing I've done; this is not about ethics," Chief Justice Roy Moore told reporters during a press conference last month. "This is about marriage."

That's Roy Moore talking to reporters in April about his order to Alabama's probate judges to refuse marriage licenses to same-sex couples.

On Friday, the state's Court of the Judiciary filed charges against Moore saying he "flagrantly disregarded and abused his authority" by continuing to try to enforce Alabama's prior ban on gay marriage.

That means for now, Moore is suspended from the bench and could eventually be removed as chief justice.

The New York Times reports most judges in the state kept issuing marriage licenses to gay couples despite Moore's order.

"I present to you the chief justice of the Alabama Supreme Court: Chief Justice Roy Moore!" a presenter shouted during a 2003 rally on the steps of Alabama's state capitol.

This video includes images from Getty Images and clips from AL.com, The Wall Street Journal, CNN and C-SPAN.