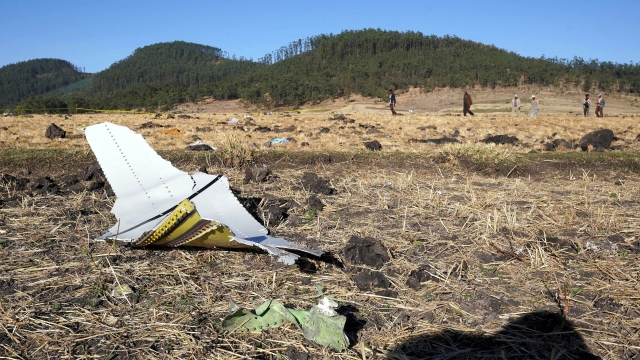 Ethiopian Airlines said it's grounded its fleet of Boeing 737 MAX 8 jets until further notice. The Monday announcement came one day after a crash killed 157 people on board one of its flights of the same model.

The Wall Street Journal reports China's decision was made before a Boeing team even made it to the crash site. But China said it had "zero tolerance for safety hazards," pointing out the Ethiopian Airlines crash was the second in recent history to involve that Boeing model going down just minutes after takeoff.

Back in October, a Lion Air plane crashed into the Java Sea, killing all 189 people on board. In both instances, the Boeing planes were new.

Investigators said faulty sensors aboard the Boeing airliner contributed to the fatal Lion Air crash. Those sensors are meant to help correct a plane's angle compared with oncoming air or wind. But the FAA said a malfunctioning sensor could lead to "significant altitude loss, and possible impact with terrain."

The investigation into the Ethiopian Airlines crash is only just starting — so aviation experts say it's way too early to draw too many comparisons between the two incidents.

Search teams recovered both the flight data recorder and cockpit voice recorder from the wreckage Monday. Both could give investigators a better idea of what happened in the flight's final moments.

The FAA and NTSB will be assisting local authorities with the probe, since Boeing is based out of Chicago. Boeing announced Monday that it has no plans to immediately issue new guidance for its 737 MAX 8 aircraft.