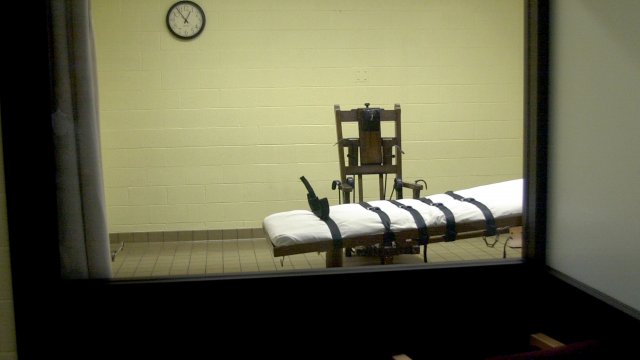 On Thursday, Attorney General William Barr told the Associated Press he'll take the Trump administration's plan to reinstate the death penalty for federal prisoners to the Supreme Court if necessary. The DOJ is appealing a district court judge's decision to block federal executions from happening for the first time since 2003.

Back in July, Barr directed the Bureau of Prisons to execute five federal inmates starting in December and ending in January.

The judge's injunction listed several reasons for blocking the executions, including the fact that Barr's order didn't follow the protocol of the Administrative Procedures Act.

DUNHAM: "The Administrative Procedures Act basically says the executive makes a proposal, it publishes that, and after a period of notice and some comment, you then have the government deciding on what the final version of the regulation is going to be. It is a regulatory process. It is not a case of the executive, getting to make a decree and having a decree become the law. … That is not how American law works."

In Barr's original directive to the Bureau of Prisons, he said the federal government owes "it to the victims and their families" to move forward with these executions quickly.

But the judge specifically rejected that claim saying, the federal government has already waited eight years to establish an execution protocol, which, "undermines its arguments regarding the urgency and weight" of resolving criminal proceedings.

Dunham believes the actual reason the Trump administration wants to restart executions so quickly is to give the GOP ammunition for the campaign trail. That might explain why Barr chose inmates who have committed particularly heinous crimes for the executions.

DUNHAM: "Having that kind of compressed execution schedule suggested that the timing was to get this into the news ... and the only thing that came to mind was that — that was at the beginning of the primaries and caucuses for the presidential election … It turns out what Barr did was identify five people whose crimes can be weaponized politically."

Since the July directive from Barr, Republican Sen. Tom Cotton has attacked presidential candidates Sen. Bernie Sanders and Sen. Kamala Harris along with Rep. Ilhan Omar for their opposition to capital punishment.

According to Gallup, public support for the death penalty has fallen sharply since 1994, from more than 80%,to about 56% last year.