After A 500-Day Trial, Bosnian Serb Leader Is Convicted Of Genocide 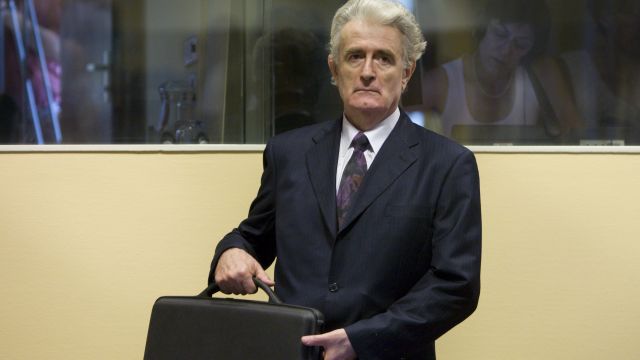 SMS
After A 500-Day Trial, Bosnian Serb Leader Is Convicted Of Genocide
By Jake Godin
By Jake Godin
March 24, 2016
Radovan Karadzic was found guilty on one count of genocide for his role in the 1995 Srebrenica massacre.
SHOW TRANSCRIPT

Former Bosnian Serb leader Radovan Karadzic has been found guilty of genocide by a U.N. court.

The decision comes at the end of a lengthy trial by the International Criminal Tribunal for the former Yugoslavia.

The conviction is for Karadzic's role in the 1995 genocide at Srebrenica. As many as 8,000 Muslim men and boys from the city were killed in one of the worst European massacres since World War II.

That massacre brought about U.S. involvement and a NATO air campaign — an operation that eventually ended the war.

Karadzic was convicted of a host of crimes against humanity including persecution, extermination, murder, deportation, inhumane acts, terror, unlawful attacks on civilians and hostage-taking.

One count of genocide was dropped, however. It was related to the other municipalities in Bosnia and Herzegovina.

Karadzic's conviction marks the end of a trial that lasted almost 500 days.

His indictment came in 1995, and he was arrested 13 years later in Belgrade, Serbia.

And the trial wasn't just lengthy — it was a massive undertaking. A total of 586 witnesses were called, and more than 11,000 exhibits of evidence were presented before the closing arguments.