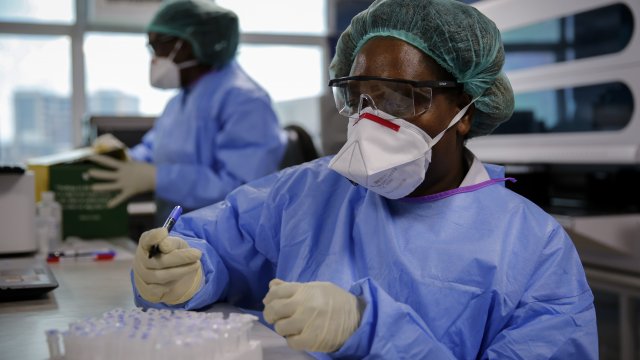 The coronavirus has begun spreading across Africa with more than 10,000 reported cases so far across 52 countries, and over 400 deaths.

In addition to the travel restrictions, lockdowns and curfews, medical scientists are racing to set up more labs to test for the virus. Particularly in areas where at-risk households are concentrated.

"Our goal is to make sure that we break the chain of transmission and not get to where countries like Italy and Spain are right now," said Dr. Mary Stephen, Technical Officer for WHO's Regional Office in Africa.

At-risk households include those with people over the age of 60 and smokers who are more vulnerable to respiratory illnesses.

Newsy obtained data from Fraym research showing where at risk households are in Nigeria, Kenya and South Africa.

In Nigeria, Africa’s most populous country, the at-risk households are concentrated in the northeast, middle belt and pockets of the south. In Kenya, they are located in parts of the mid-west and south. And in South Africa, the hardest hit country on the continent, the at risk homes are along the coast and in the major cities.

Recently, all three countries have rapidly enhanced testing capacity. When we compared the location of the testing sites to where vulnerable communities are, here’s what we found:

Nigeria has nine testing sites, seven of which are in or close to those at risk communities. The country plans to expand to 13 sites. Kenya is expanding from two to nine sites, all of which are concentrated in the at-risk areas. Most of South Africa’s labs are privately run, but government-run labs will soon go from six to nine, five of which are in the most vulnerable communities.

"If you have more laboratories it gives you an advantage. You want to test more people as quickly as possible. Also, it reduces the turnaround time," said Dr. Stephen.

The World Health Organization and the African Union’s Centers for Disease Control are helping countries boost testing capacity and the number of tests they provide.

"The best strategy is not to have many critically ill patients and we are doing that by testing," said Dr. Ahmed Ogwell, Deputy Director for the Africa CDC.

In South Africa with over 1300 confirmed coronavirus cases, the government has turned to aggressive testing and monitoring.

"Around 10,000 field workers will be visiting homes in villages, towns and cities to screen residents for the coronavirus symptoms," said South Africa's President, Cyril Ramaphosa.

Yet testing remains a luxury for some African countries.

"For those countries that don't have the capacity to do the testing and those are relatively few now we have a mechanism where their samples can be able to be transported to the nearest laboratory that can be able to do it in a neighboring country," said Dr. Ogwell.

The continent has learned invaluable lessons from combating infectious diseases like cholera, meningitis and Ebola.

"In terms of outbreak response, the mechanisms are basically the same. The only thing that makes the difference is the peculiarity of the disease you're dealing with," said Dr. Stephen.

But with few medical resources and staff, authorities are rushing to contain the spread of the virus in Africa.

"The health systems are fragile. Adding COVID-19 to it is a recipe for something that is quite unpleasant and we are trying to slow that down," said Dr. Ogwell.

Update: Since the publication of this story, Nigeria has expanded its testing capacity from nine locations to 13, including labs in the northern part of the country in Kano and Sokoto states.