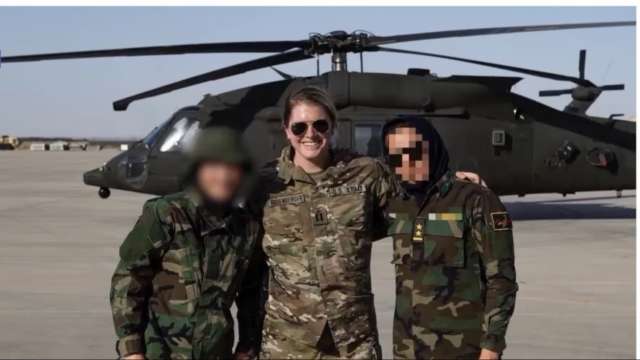 One year after the U.S. pullout, these women who served in Afghanistan's security units are among the most endangered — even outside of Afghanistan.

Meet a woman we're calling "Fatima" for her security. She was part of a covert unit inside the Afghan National Army. It's called the Female Tactical Platoon. These so-called "FTPs" fought the Taliban, alongside male commandos.

U.S. Army Special Operations trained Fatima on assault rifles, machine guns, and rocket launchers. She says her job was to recruit female forces and help the families of Afghan soldiers who died in the line of duty.

In early August, after a year of hiding and living in fear in Afghanistan, she quietly fled to Turkey on foot. She says she didn't get help from Americans; her family sold all their possessions to pay for a smuggler. They walked for 11 days. But when they crossed into Iran, her parents and two siblings couldn't run fast enough to escape soldiers. They were sent back to Afghanistan.

She was in pain when we spoke, saying she broke her finger and lost her toenails on the journey. But she can't see a doctor, or find a job, because she's living in Turkey illegally.

A source familiar with rescue operations for this covert group says about 26 women remain in Afghanistan. They don't have exact numbers. They lost track of some, and one woman died a few days before her evacuation began; that woman, Mahjabin Hakimi, was found hanged. For those who made it to the U.S., there was talk of transferring them into the U.S. Army and one day putting them in special operations forces. But that plan has been delayed.

We also found a former intelligence and security officer, living in a secret like Fatima. This time, in Pakistan. Nahid let Newsy use her real name because she was already featured in documentaries and recruitment videos.

She says she lost contact with U.S. intelligence forces. They taught her how to fire glock pistols and interrogate prisoners. She also learned to read the faces of female relatives of Taliban fighters during dangerous night raids. But she still gets regular text messages from the Taliban, and fellow officers who have switched sides.

But even in Pakistan, Nahid worries. She fears the police or military will conspire with the Taliban against her. And she has good reason. She says a distant friend who worked with her vanished when she tried to pick up her immigrant card.

Nahid says she would fight the Taliban again, if she ever gets the chance. But Afghanistan cannot depend on other countries to solve its problems.