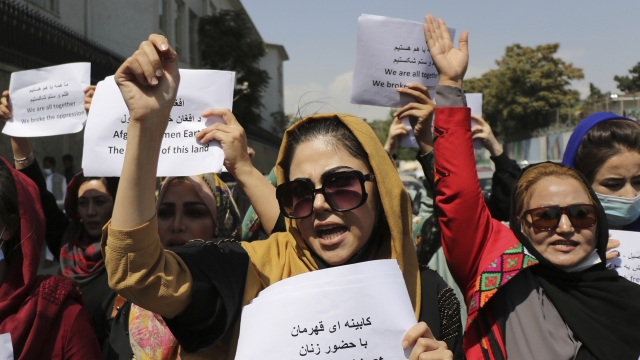 SMS
Afghan Women Fight Back, Protest Against Taliban
By Ben Schamisso
By Ben Schamisso
September 10, 2021
Exclusive footage from a Newsy photojournalist in Kabul takes us inside one of the largest protests under Taliban control to date.
SHOW TRANSCRIPT

Afghan women are continuing to fight for their rights as the Taliban crackdown intensifies.

"They are not our people, they are terrorist. They are killing our people," one protesting woman said.

Exclusive footage from a Newsy photojournalist in Kabul takes us inside one of the largest protests under Taliban control to date.

The march was Tuesday — just as the Taliban announced an all-male interim government.

All week, groups of women in Kabul and elsewhere in the country have taken to the streets at great personal risks — wearing hijabs and bravely showing their faces to the world.

Their demands? Equal rights and inclusion in government and society.

The activists also shouting support to resistance fighters in the Panjshir province — and against Pakistan's influence in their country.

"Our demands are this: stop killing them," the protesting woman said.

In response, the Taliban have used whips, sticks and live ammunition to beat up and break up the protests — as seen in this footage captured with cell phones.

"We call on the Taliban to immediately cease the use of force towards, and the arbitrary detention of, those exercising their right to peaceful assembly and the journalists covering the protests," said U.N. High Commissioner for Human Rights spokesperson, Ravina Shamdasani.

The Taliban have detained at least 14 reporters covering the protests — assaulting nine of them, according to the committee to protect journalists.

One reporter told Newsy the Taliban hit him on the head, broke his ribs and stole his notes, accusing him of "spreading false propaganda."

Now, in one of its first moves, the new Taliban leadership has banned all demonstrations without government approval, warning of "severe legal consequences" for those who disobey.

A reporter asked, "Are you going to continue doing this? It's dangerous."