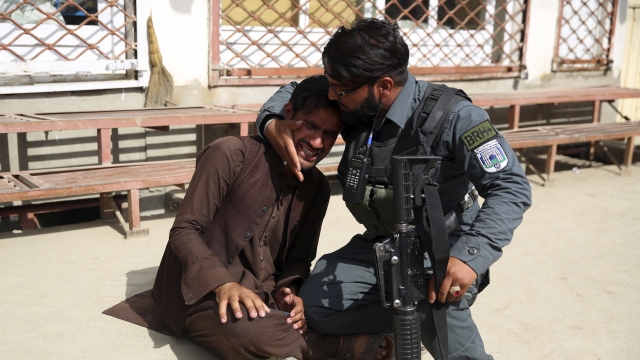 SMS
Afghan President Orders Offensive After Attack On Maternity Hospital
By Peter Hecht
By Peter Hecht
May 14, 2020
The Afghan president vowed military action against "the Taliban and all other terrorist groups" after attack on hospital.
SHOW TRANSCRIPT

Afghan soldiers are on the move as President Asraf Ghani is ordering a military offensive against militants who carried out a deadly attack on a maternity hospital in Kabul on Tuesday.

At least 24 people were killed and 16 were wounded as gunmen stormed the hospital. The dead included two newborns as well as mothers and nurses. About 20 infants are getting follow-up care.

Hours later Tuesday, a suicide bomber attacked a police funeral in the Nagahar province, killing another 24 people. And Thursday, five civilians were killed as a bomb detonated when another attacker tried to reach a military compound in Paktia.

The violence threatens to topple the Afghan peace process. In February, the U.S. reached a tentative agreement with Taliban forces fighting to overthrow the Afghan government. U.S. troops are to be drawn down on the condition of the Taliban ending attacks and holding peace talks with the government. Those talks haven't happened.

Now, another militant faction — the Islamic State — is claiming credit for the hospital attack as well as the police funeral bombing. The Taliban denies involvement.

President Ghani visited the hospital after Tuesday's incident. He said "The Taliban have not given up fighting and killing Afghans" despite calls for a cease-fire. And he pledged a military response to (quote) "defend the country, safeguard our countrymen and infrastructure, and to repel attacks and threats by the Taliban and all other terrorist groups."

The Taliban, a rival to the Islamic State, claimed credit for Thursday's bombing outside the military compound. It said that was retaliation for Ghani blaming it for storming the hospital.