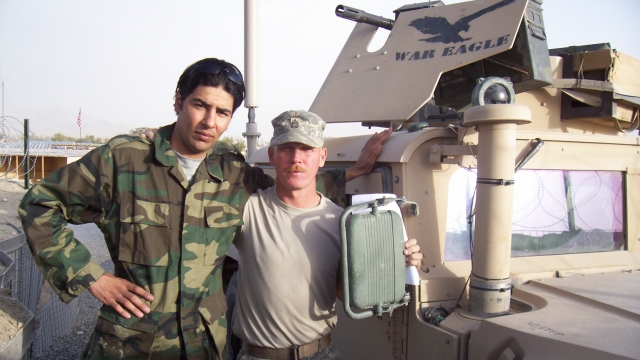 SMS
Many Afghan Interpreters Risked Their Lives For the U.S. — Now What?
By Ben Schamisso
By Ben Schamisso
April 28, 2021
Pressure is mounting on Congress and the Biden administration to not leave behind thousands of Afghan interpreters, even as troops start coming home.
SHOW TRANSCRIPT

"If I die in this mission, this would be my last picture that will go to my family."

Afghan refugee Janis Shinwari looks back fondly on his extraordinary service for the U.S. Army.

"Two Americans in this mission plus 20 Afghan National Army," Shinwari says while looking at photos from a mission in Afghanistan.

For seven years, he fought against the Taliban shoulder-to-shoulder with American and Afghan soldiers while serving as a key bridge between the two armies.

"If there is no interpreter, how can they do this mission?" he asks.

During his service, Shinwari saved the lives of five Americans and ended up on a Taliban kill list.

In 2013, he resettled to Virginia with his family — after three years of intense vetting by the U.S. State Department.

Today he's part of a growing coalition of advocates pressuring Congress and the Biden administration to not leave behind thousands of Afghan interpreters, even as troops start coming home.

"Those people will be tortured in front of their kids and family and they will be killed. They put their lives at risk the same way I did. And they deserve to be here," Shinwari said.

Many American soldiers who served in Afghanistan agree. They say bringing interpreters to the U.S. as soon as possible is not only the moral thing to do, it's also in our own interest.

"We can't do it without them," said Daniel Elkins, the co-founder of Special Operations Association of America.

"And if they don't believe that we're going to come through on our side of the bargain, they're going to be less likely and reluctant to help us," added Elkins, who deployed to Afghanistan in 2016 and 2017 and worked closely with interpreters.

More than 18,000 Afghans and their families are waiting for the U.S. to process their Special Immigrant Visas, a refugee program for interpreters and other civilians who were employed for at least two years by the U.S. Army or U.S. government — and face a serious threat as a result.

Applications are required to be processed in nine months. But the current wait time is around three years.

"Hundreds of these applicants have been killed while waiting for their applications to be processed," said Adam Bates, policy counsel at the International Refugee Assistance Project.

While a group of bipartisan lawmakers is pushing to add more visas to the SIV program, Bates says our Afghan allies deserve quicker and bigger solutions.

"We're thinking more along the lines of airlifts to other U.S. territories such as Guam, in order just to get people out of the country," he said.

As for Shinwari, he says he's been inundated with messages from distressed Afghan interpreters ever since President Biden announced the imminent U.S. withdrawal from Afghanistan.

"They're not only asking, but they're begging to come here and be safe," Shinwari said.