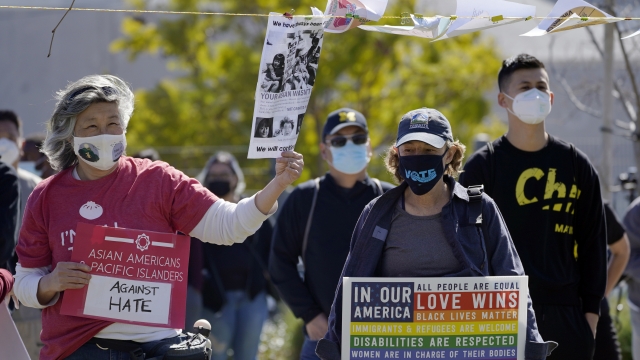 Attacks on Asian Americans and Pacific Islanders, or AAPIs, have gone viral. And in some incidents, the perpetrators are Black -- leading to some in the AAPI community to address anti-Black sentiment.

Community leaders want to dispel stereotypes like the criminality of Black people and that Asians are the source of COVID.

There is an intertwined history between the AAPI and Black communities. In the L.A. riots of the '90s, tensions rose between Korean immigrant business owners and Black Americans after a 14-year-old Black girl was shot and killed by a Korean convenience store owner who thought she was stealing a bottle of orange juice. Asian American studies professor Janelle Wong says we can learn from this history.

She said, "Today, Korean Americans are among the most racially progressive when it comes to support for Black Lives Matter and when it comes to the government doing more to create equal rights between Blacks and Whites."

It took years of coalition-building between the Korean American and Black community leaders.

"When you have narratives that attempt to divide each other, what you're doing is distracting to the solutions, the root causes to what's impacting both of those communities," says Cherri Murphy, a social justice minister in Oakland, California. "Which is why it's really essential that we have these community-centered resources."

Both communities have felt the impact of the pandemic — whether it's job losses, food shortages or seeking mental health care. Experts say the fight for resources is pitting communities against each other when they could work together.

"Historically, the AAPI community has benefited from the Black communities' fight for civil rights, which led to the Immigration and Nationality Act of 1965 that allowed all our families to come over to this country. And many AAPIs now, especially the younger generation, understand that our liberation is always bound up with the Black community and other communities of color, and we can't make gains without working together," said Joo Han, deputy director of advocacy group Asian American Federation.

Local leaders suggest the two communities join forces to push for resources as an alternative to more policing that includes youth job placement and investing in anti-poverty programs.